I had no idea what was to come as the family car headed up Nova Scotia’s Sunrise Trail on the last weekend of June, 1983.

I knew it involved another Highland dancing competition for my younger sister Colleen, who had been taking lessons for the previous two years and was just starting to make her way to competitive events and performances around the Maritimes.

But I wasn’t aware that I was about to discover a village that would have so much to teach me about tradition, culture and community pride throughout my life, and leave its mark as the first community other than my own that I would ever see celebrating Canada Day.

Then again, this was only my first trip to Pugwash.

Now, this may surprise you, but in my first eleven years of life in Cape Breton, I had no exposure to events such as The Gaelic Mod at The Gaelic College in St. Ann’s (I barely knew the college existed) or even the Antigonish Highland Games, just a hop, skip and a sword-dance across the Canso Causeway. So when my folks declared that we were going to some oddly-named place called “Pugwash” for one of Colleen’s competitions, I just shrugged and envisioned yet another community hall or school gymnasium or a field somewhere in some random part of Nova Scotia that I had never visited. (For nearly-eleven-year-old me in the early ’80s, that applied to roughly 98 per cent of Nova Scotia.)

So imagine my surprise when we got to Pugwash on June 30, 1983 and discovered that this little community, no bigger than my own home of L’Ardoise, went all-out for its annual Canada Day bash, with its annual Gathering of the Clans celebrations coinciding with our nation’s birthday. Imagine this Cape Breton boy’s amazement when he learned that the July 1 party in Pugwash included a massive street parade, more pipe bands than he had ever seen in his entire life (I suspect that still applies to me today, at the age of 45), a midway with rides and games, and day-long Highland dancing competitions on an outdoor stage in something called Cyrus Eaton Park.

(The bottom-left photo shows me in front of that outdoor stage and my sister Colleen in Highland-dancing mode onstage; the bottom-right photo shows a Gathering of the Clans dance competition on the same stage from – wait for it – 1940.) 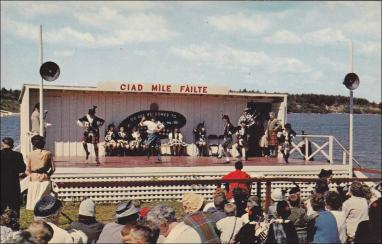 It was the first time I had seen a community other than my own celebrate everything it had to offer, and it made an immediate imprint on my heart, mind and soul. Even at the tender age of ten-going-on-eleven, I recognized this type of hometown pride when I saw it. So I was delighted that the remainder of Colleen’s Highland dance training and competitions over the following three years included return trips to Pugwash and more opportunities to see the Gathering of the Clans, its outdoor entertainment and its colourful parades, as well as some of the most beautiful beaches on the Northumberland Strait – and, arguably, in all of Nova Scotia.

I didn’t make it back to Pugwash for nearly two more decades after our last family visit in 1985, but I always had a soft spot for the area. In 2004, when I started performing more regularly around mainland Nova Scotia to help promote my second album of original music, EAST, I knew I wanted to get to Pugwash and sought out venues in the community. Some of my fondest memories in that regard are connected to the Hillcrest View Inn, which had me perform multiple times in its restaurant and also sold copies of my album. That venue also introduced me to the “Pugwash Splash,” a delightful non-alcoholic mix of tropical fruits and seasonings that remains one of my favourite Maritime thirst-quenchers, even approaching Prince Edward Island’s bottled Raspberry Cordials.

(Bizarrely, it was in the parking lot of the Hillcrest View Inn that, via cell phone, I did my first-ever music-related interview for The Cape Breton Post. As a child, I was as unlikely to consider any aspect of such a scenario as I was to imagine so many amazing sights, sounds and and memories being generated by a community named “Pugwash.”) 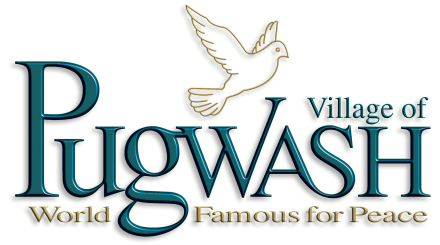 Around this time, I started learning a little more about Pugwash’s history and its reputation for gatherings that had a worldwide impact for their focus on global peace. In 1957, during the duck-and-cover era of the Cold War, investment banker and businessman Cyrus Eaton (yes, the park’s namesake), who had grown up in a farm near Pugwash but was living in Cleveland at the time, decided to sponsor a conference featuring scientists and intellectuals from around the world that would zero in on the dangers posed by weapons of mass destruction, particularly nuclear weapons. Eaton provided the funding for this gathering in his home community; organizers were hoping to bring in eleven of the world’s great thinkers but wound up with twenty-two, from countries as diverse as Canada and the U.S. to the then-Soviet Union, Japan, the United Kingdom and Australia.

And so began the Pugwash Conferences on Science and World Affairs, which would continue – in the Cumberland County site now known as Thinker’s Lodge and other locations around the world – throughout the following six decades. Conference organizers eventually added environmental issues to their discussions and, in 1995, were awarded the Nobel Peace Prize (jointly shared with one of the original 1957 participants, British-Polish physicist Joseph Rotblat). Thinker’s Lodge (below), now a National Historic Site, still hosts several conferences and leadership activities for people of all ages throughout the year; meanwhile, the 60th-anniversary edition of the Pugwash Conferences will take place later this month, on August 25-29, in Astana, Kazakhstan.

I don’t know how many Pugwash residents are going to fly to Kazakhstan for the 60th anniversary celebrations, but as I’ve mentioned earlier on, Pugwash certainly knows how to throw a party on its own. More proof emerged in 2012, when the village won a spot on TSN’s Kraft Celebration Tour, an annual series of remote broadcasts that also provides funding for sports programs, athletic facilities and related activities within the winning communities. That enabled Sport Pugwash to spend $25,000 upgrading its local ball field, which had fallen into such disrepair that Pugwash-based teams were forced to play their home games in other communities for the better part of a decade. (The field is now named after local sports legend Roy Mattinson, who was profiled for this CBC feature.)

Now, I’ll admit that Pugwash’s victory in the online voting for the TSN 2012 Kraft Celebration Tour was bittersweet, because three communities in my neck of the woods – including my current hometown, Port Hawkesbury (the official runner-up) and two spots not far from my native L’Ardoise, St. Peter’s and River Bourgeois – were also vying to join the TSN tour and the funds that would go with it. We were all pretty stoked after seeing another Strait area community, Port Hood, win a spot on the tour the previous summer, with a live broadcast of TSN’s Sportscentre from the Al MacInnis Sports Centre and the arrival of $25,000 in funds for the community’s sports facilities.

But in the end, I just couldn’t be mad at Pugwash. They had made a great case for both the exposure and the funding, and even if neither of these things were true, they had won my heart many times over with their never-say-die spirit, devotion to their history and culture, and promotion of the very best any community has to offer itself, its visitors and the world. (Besides, you try being upset at people involved in a jubilant celebration like this one that erupted when Pugwash was announced as the winner in the early summer of 2012.) 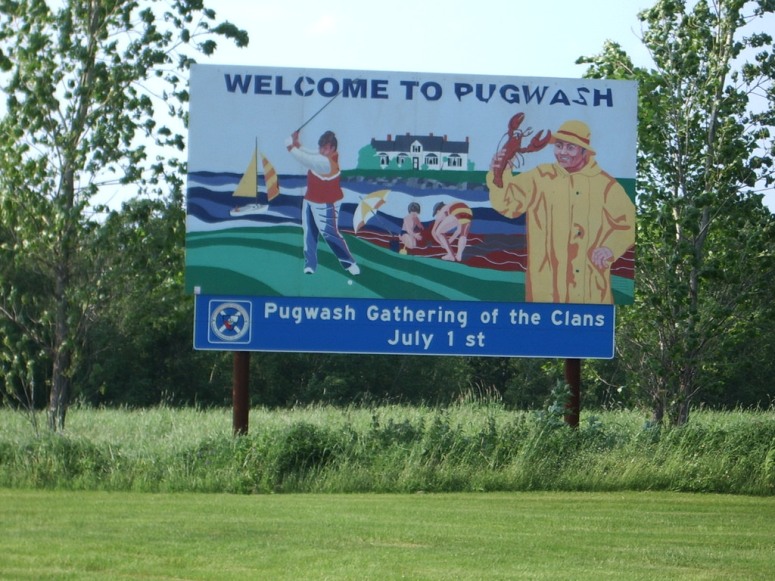 So I’ll always smile a little bit when I think of that colourful Cumberland County community. It’s inextricably linked to my Canada Day experiences and my sense of Nova Scotia as a whole. Both elements were reinforced when I learned that the Highland dance competitions from this year’s Gathering of the Clans celebrations were actually moved from Canada Day to this coming Saturday, August 12. (This officially occurred to avoid conflicts with a national dance competition taking place in Charlottetown on Canada Day, but as you can see by this article, it’s not like Pugwash residents didn’t have anything else to do on July 1, anyway.)

And I’ll even smile when I hear stories like the one my wife Cathy told me five years ago after she returned from a Christian youth conference in Moncton with a group of Port Hawkesbury-area youth, including a young woman who looked out at a highway sign on the Cobequid Pass in northern Nova Scotia and quizzically asked:

I might have asked a similar question 35 years ago. I’m glad I learned the answer.

[Footnote: One of the first people to read this blog post said she figured I’d actually answer the question “What’s a Pugwash?” by sharing the origin of the village’s name. And, you know what, she’s got a point. It’s derived from the aboriginal Mi’kmaq name “Pagweak,” which means “shallow water,” in reference to a reef at the local harbour mouth that makes navigation through shallow waters more difficult. My apologies for omitting this information in the original version.]