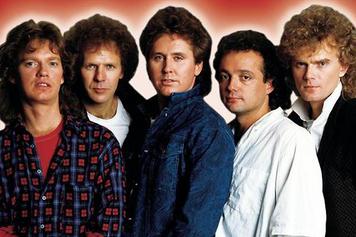 WARNING: I’m just beginning a nine-day vacation, so I’m not going to be especially profound in this particular blog post. (I know this will shock a lot of you, given the gravity of my dissertations about the game show Definition and my favourite take-out food joint in St. Peter’s. Bear with me, folks.)

So perhaps it’s just as well that I’ve arrived at this particular topic right now, because I’m saluting a group of guys from Canada’s West Coast that didn’t need to be especially profound to top the charts here at home or around the world, and looked like they were having a grand old time while they were doing it. And decades after they released their biggest hits, they’re still part of the Canadian pop-culture zeitgeist, our unique musical milieu, and my own personal playlist.

I discovered them late in their initial blast of fame, well after they had sold millions of albums on the strength of singles like 1980’s “Turn Me Loose” (which hit #7 on the Canadian charts and #35 on the American charts) and 1981’s “Working For The Weekend” (reaching the #2 position on the U.S. rock charts after peaking at #10 on the Canadian singles charts).

My formal introduction to Loverboy came on New Year’s Day, 1984, courtesy of the CBC youth series Switchback. (Spoiler alert: You’re going to hear a lot more about Switchback on this blog very shortly.) At the time, the show had three regional versions airing in Halifax, Winnipeg and Vancouver, and all three joined forces for a pre-taped holiday special that invited viewers to vote for their favourite videos of 1983. Inexplicably, the Loverboy song “Queen Of The Broken Hearts” was voted the top regional hit for Atlantic Canada, even though the band’s home base of B.C. seemed more interested in Michael Jackson, Billy Joel and Quiet Riot.

No matter; “Queen Of The Broken Hearts” entered my ears and my brain for the first time. The video itself, featuring the band members performing the song while being stalked by some odd tribe of cave women, is rather forgettable, and makes me wonder how Loverboy managed to get so much airplay on MTV for the clip of its previous hit, “Hot Girls In Love.” But the song, like a lot of Loverboy’s output, is full of catchy guitar licks, keyboard hooks, and an up-tempo vocal performance by lead singer Mike Reno that makes me want to sing along (even though he seems to be dissing the song’s title character throughout its nearly four-minute run time). Small wonder that guitarist and backup vocalist Paul Dean described “Queen Of The Broken Hearts” as a signature song for the group, noting that it contained so many elements found in other Loverboy hits.

Apart from his Loverboy duties, Reno would dabble in two other notable projects over the following 12 months. He teamed-up with Heart’s Ann Wilson to record “Almost Paradise” for the original Footloose movie soundtrack, reaching #1 on the U.S. Hot Adult Contemporary Charts and winning the university-age heart of the woman who would eventually become my wife. A few months later, Reno had a solo line in the all-star Canadian musical charity single “Tears Are Not Enough,” which raised millions for Ethiopian famine relief. (The song is still a favourite of mine, and I played it solo years later at two benefits for Asian tsunami victims; when a former radio colleague found out, he was dying to know if I replicated Reno’s high-pitched delivery of the line “We can make it work, for God’s sake, lend a hand.” Even though it got producer David Foster to boisterously applaud Reno, I restrained myself from doing a faux-Loverboy falsetto; I think my audience appreciated that even more than my larynx.)

In the mid-’80s, Loverboy released the album Lovin’ Every Minute Of It, whose relentlessly-catchy title track was a winner for me and my fellow eighth-graders at Ecole L’Ardoise. One of my friends recorded the song’s video and it became a lunch-hour favourite when we commandeered the VCR in the school’s audio-visual room. Weirdly, the “Lovin’ Every Minute Of It” video also wound up being the first opportunity I got to hear “Workin’ For The Weekend,” which is played – acoustically and deliberately-badly – at a Holiday Inn by an ersatz new wave band which gets replaced by Loverboy at the end of the clip. (My junior-high friends and I thought we were hilarious by mimicking the replaced band’s last lines in the video: “They don’t know how to play Loverboy! Not even close!”)

Reno and company also turned heads with a couple of memorable power ballads, 1985’s “This Could Be The Night” – which I’ll freely admit to inadvertently cribbing for one of my first teenage attempts at writing a love song, “Secret Admirer” – and 1986’s “Heaven In Your Eyes,” best known for being on the soundtrack of the early Tom Cruise mega-hit Top Gun. My research for this blog dug up two tidbits that I hadn’t previously known about “Heaven In Your Eyes” – Loverboy’s keyboard player, Doug Johnson, refused to appear in the video because he felt Top Gun glorified war and military service (ya think?), and the song was co-written by one of my favourite singers of the past 25 years, British Columbia native Mae Moore. (Apart from being born in Canada, I can’t think of a single other reason that I would utter “Loverboy” and “Mae Moore” in the same sentence – with all due respect to both artists, mind you.)

And then, even though they were still recording, releasing and performing fresh material into the late ’80s and early ’90s, Loverboy just seemed to fade from the public consciousness, their early-’80s sound out of step with turn-of-the-decade big-hair metal bands and particularly with the ’90s grunge movement. Even classic-rock stations didn’t seem to know what to do with the boys from Vancouver, nor did the music video channels that had so adored them only a few years earlier. In a 1996 issue of my beloved MAD Magazine, writer Desmond Devlin’s article “The Worst MTV Contests of All Time” included a joke that saw a 1992 “winner” receiving a house concert that featured Loverboy sharing the bill with fellow ’80s chart-toppers Billy Ocean (who, coincidentally, had a 1985 hit with a song called “Loverboy”), Men At Work, Debbie Gibson, Mr. Mister, and Wang Chung. The accompanying illustration by artist Rick Tulka didn’t feature any of the named musicians (described as “a $12 value!” in the gag line) but instead depicted the contest winner with a pistol cocked to his head, unable to bear anymore of the allegedly-horrible music spilling out of his house.

Strangely, it’s around this time that I started developing an appreciation for Loverboy’s early hits, which were slowly but surely creeping back into the limelight. “Working For The Weekend,” in particular, wrapped itself around my psyche and wound up on one of my late-’90s highway-driving mix-tapes; to this day, it’s hard not to smile when that familiar four-cowbell intro kicks in and the B-major synth parts that used to seem so overpowering bring me back to a simpler time. Others who apparently felt the same way: Saturday Night Live, who used it for this beloved 1990 skit featuring Chris Farley and Patrick Swayze as would-be Chippendales dancers; Diet Pepsi, which featured it in this spot for their nostalgia-themed “Forever Young” campaign in the mid-2000s; and Will Ferrell, who sang it – in the guise of his Anchorman movie character Ron Burgundy – on Conan O’Brien’s TBS show in 2013, as the “re-election theme song” for controversial Toronto Mayor Rob Ford. (For reasons that should be obvious to everybody, I hope that’s the only time I’ll have to refer to the late, incredibly-troubled Ford on this blog.)

I have a similar affection for “Turn Me Loose,” the 1980 Loverboy breakthrough hit that I wouldn’t hear in its entirety until 16 years later, as featured on the Oh What A Feeling box set that commemorated the 25th anniversary of the JUNO Awards. From a strict JUNO standpoint, it made sense to include the group, which has won six JUNOs and was inducted into the Canadian Music Hall of Fame during the 2009 JUNO Award broadcast. But “Turn Me Loose” itself is arguably the definitive Loverboy song, right from the opening synth notes and the basic-but-unmistakable bass riff. Thirty-seven years later, there’s an entire generation of rock fans – Canadian or otherwise – that lose their minds when that synth and bass collide, which could explain why Loverboy is still playing “Turn Me Loose” to this day. (Yes, seriously, they are; check out this 2014 performance and this 2016 rendition. Mike Reno seems to be having a little trouble with the infamous high-G note just prior to the first chorus, but he and his bandmates do a nice job of turning back time through the rest of the song.)

So here’s to the boys-turned-men of Loverboy – Reno, Dean, Johnson, drummer Matt Frenette and bassists Scott Smith (who passed away in 2000) and Kevin “Spider” Sinnaeve, who has ably replaced Smith over the past 17 years. Love them or hate them, it’s hard to deny that their legacy of feel-good rock, which overcame several rejections by major record labels in the late ’70s and early ’80s, has found its place on the charts and in our hearts.

(And, also, on the Web, as you can see by their official site and their Twitter feed. Yes, Loverboy is on Twitter. What a time to be alive and Canadian, eh?)