So far on this blog, I’ve posted extensively about some of the giants (literal and otherwise) of Canadian children’s television – shows like The Friendly Giant and Mr. Dress-Up that have become iconic, and the Canadian versions of U.S.-produced series like Sesame Street that have their own place in the cultural landscape of our great nation.

But as I was growing up in rural Canada in the ’70s, with only three channels available to me – CBC, CTV (known as ATV in the Maritimes at that point) and the French-language station Radio-Canada – I was exposed to many other children’s TV series, some more effective than others. In those innocent childhood days, I had no idea that many of these shows had lengthy runs on Canadian TV (specifically, CTV/ATV), or were at the very least launched by performers with years, even decades, of experience in catering to the younger set.

What we got: British ex-pat Bob “Uncle Bobby” Ash, reading stories to children and sharing their letters and drawings, with occasional visits from various puppet friends and characters like safety-minded Officer John (as you can see in this YouTube clip, which suggests that the performers occasionally had trouble keeping a straight face during takes).

Why I still remember it: The bizarre segments featuring Bimbo The Birthday Clown, a huge, rather creepy one-dimensional character brought out to celebrate and/or traumatize the kiddies on their special days. Bimbo had two different voices at two different speeds, as you can hear from this odd little theme song, which my wife Cathy can still sing to this day. (I would not be all that surprised if the makers of Disney-Pixar’s Inside Out watched The Uncle Bobby Show as children, as the song Joy sings with “imaginary friend” Bing Bong strikes me as being a distant relative to Bimbo’s theme, especially as it gets faster.)

After the studio lights went down: Bob Ash devoted his time to children’s book-writing, kept in touch with his fans, and continued to live in The Uncle Bobby Show’s home of Toronto before moving to Elliot Lake, Ontario (as you can see in this news clip prepared roughly a year before he passed away in 2007). 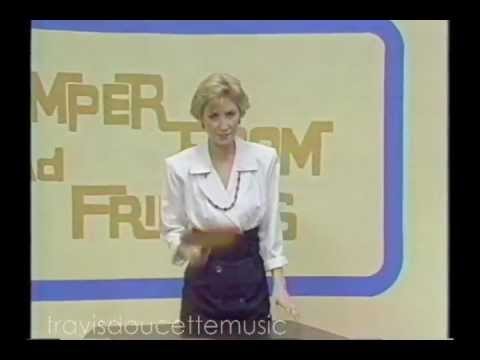 What we got: As I waited with bated breath for the gentle, friendly and energetic Fran Pappert (aka. “Miss Fran”) to look into the mirror frame and say “And I see Adam…” at the end of every episode (it never happened while I watched), I had no idea that I was tuning into one of the most heavily-franchised brand names in children’s TV history. The national CTV version (later hosted by Jeanette Moffat and Betty Thompson) was just the latest in a long line of Canadian Romper Room broadcasts that took place in communities as diverse as Halifax, Saint John, St. John’s, Toronto, Windsor, Hamilton and Sudbury, dating back to 1954; a full listing of the dozens of Romper Room broadcasts across Canada and the U.S. and around the world is available here.

Why I still remember it: The goofy but infectious theme song, as well as the colourful “nursery school on TV” atmosphere, as seen in this clip about fire safety, not to mention the presence of the giant insect mascot Do Bee. Because if you’re going to develop a character that doesn’t scare kids away, nothing beats a huge buzzing insect that can sting you to within an inch of your life. (You may have guessed by now that I still have issues with bees.)

After the studio lights went down: As you can see from this 2010 interview with The Waterloo Regional Record, “Miss Fran” – now 61 and going by Fran Pappert-Shannon – felt unfulfilled after leaving the children’s TV scene, experienced difficulties ranging from divorce to breast cancer, and eventually converted to Islam. A Roman Catholic churchgoer in her childhood and adolescence, she says she later “felt disconnected from God” until she passed by a Waterloo mosque, started reading the Qu’ran, and officially accepted the Muslim faith in 2009. 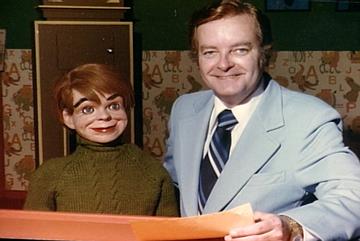 Stay with me, now: I’ve scoured the Web to try to find the exact airdates for this show, produced by Winnipeg’s CKY-TV and broadcast nationwide on CTV, and unfortunately I’ve come up empty. What I can confirm for you is that a daily CKY-TV series featuring Funtown‘s star, puppeteer Bob Swartz, and many of the show’s characters ran from 1965 to 1986 under the title Archie and His Friends. (The title character, wise-guy Archie Wood, is pictured above with Swartz.)

To add to the confusion, on that daily series Swartz was known as “Uncle Bob” (yes, another one), but on Funtown he played the fictional puppet-filled town’s mayor, imaginatively named Mayor Bob. (I distinctly remember one Funtown episode where a guest addressed Swartz as “Uncle Bob, uh, I mean, Mayor Bob.” No money in the budget for a second take, apparently.)

What we got: A low-rent, kid-friendly blend of the ingredients commonly found in the likes of The Muppet Show, Laugh-In, The Smothers Brothers and your childhood nightmares. Funtown had “straight” pieces with Mayor Bob interviewing interesting people in Winnipeg (even going SCUBA-diving, sans fins, at a local pool) but rooted most of the show in offbeat comedy segments featuring Swartz’s puppets – Archie Wood, Grandpa Wood, Tammy True, Marvin Mouse, Tuttle the Turtle, Petite the Puppy, and talking garbage can Les Litter -and occasional human buffoons like The Caretaker and Professor Know-It-All. 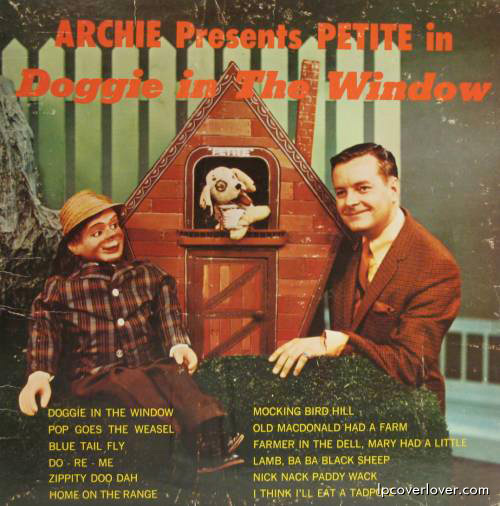 The puppets would also frequently sing, choosing from one of the most eclectic set lists ever foisted on children’s TV viewers, as you can see from this K-Tel Records commercial featuring the Funtown cast. (Trust me, once you’ve heard Archie Wood sing “Rhinestone Cowboy,” it just never sounds the same again.) Or, if you want to get an early start on your Canadian holiday celebrations, check out the late-’60s Archie and His Friends Christmas album at this link.

Why I still remember it: The puppets, and occasionally the human characters like Professor Know-It-All, both had a considerable amount of sass and attitude for children’s entertainment (I remember Tuttle, Marvin and Grandpa Wood being particularly lippy in some episodes). Some of the adventures, including Mayor Bob’s regular “Flying Carpet” segment and a mid-’70s plotline that had Marvin stealing Tuttle’s shell and smuggling it onto a rocket ship for a space voyage, were just goofy enough to satisfy my little brain, even though they’d never be mistaken for Industrial Lights and Magic output. And the Funtown theme song, an odd but catchy instrumental piece, inspired me to write lyrics about how much I loved the show in the second grade, representing the first time I ever seriously tried to make anything rhyme.

After the studio lights went down: Bob Swartz was only 55 when he passed away in Gimli, Manitoba, in 1989, only three years after wrapping up Archie and His Friends. That show, and Funtown, are lovingly archived at this YouTube account, appropriately named “archiewood.”

What we got: A charismatic green-clad leprechaun, played by actor-singer Barry Dale, singing songs, sharing stories, reading viewer letters and dancing a wee jig among crayon drawings every so often (particularly during the relentlessly-cheerful opening and closing theme song). The mail was delivered by Mrs. Sunflower (aka. the star’s wife, JoAnna Dale), and while several children were originally tested out as Deb-Lyn the Elf, the role finally went to the Dales’ daughter Deborah Lyn Shenstone. (“That’s nepotism to the nth degree,” Dale joked in this remarkable interview by Sam Tweedle of the Confessions of a Pop Culture Addict site.) 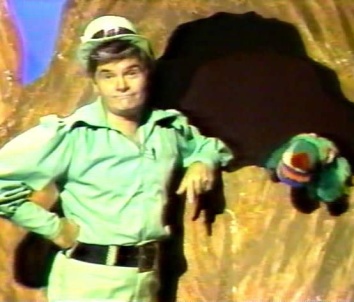 (Above left: Harrigan and Deb-Lyn peer into the pot of gold. Above right: Harrigan and his buddy Mr. Green, who was also voiced by Deborah Lyn Shenstone.)

Why I still remember it: Apart from the aforementioned jig-time theme song (all together now: “H-A-double-R-I-G-A-N”), Dale was committed to the leprechaun character and yet managed to speak directly to his young viewers without being cloying or talking down to them. He also brought in entertaining storytellers as guests; I vividly remember one such fellow who told of trying to avoid eating chocolate cake only to have a voice emerge from the last piece in the fridge: “I am GOD. I am IN THIS PIECE OF CAKE. I want you to EAT ME.” (He wound up sharing that piece of cake with the kids assembled around him; I still have no idea how that bit cleared the CTV censors.)

And I’ll never forget the thick-voiced Mr. Green puppet, apparently sent to the show’s producers by Ottawa schoolchildren who were attempting to make a dog (all this time, I thought it was a dragon). At the end of each episode, Harrigan would shrink himself to dance in the crayon drawings for the closing theme, with the “shrinking” always followed by Mr. Green gasping, “OOOOPS!” (I still say that today whenever I make a silly mistake in front of Cathy.)

After the studio lights went down: Barry “Harrigan” Dale operated a pizzeria for a dozen years and eventually moved to Arizona, where he rediscovered his love of singing – especially Sinatra-style crooning – and has performed with everything from trios to 14-piece bands over the last 15 years. Sadly, his wife JoAnna passed away in 2014; Deborah Lyn Shenstone, aka. “Deb-Lyn The Elf” and “Mr. Green,” is now a grandmother.

Honorable Mentions: CTV’s Let’s Go, Kidstuff, Tree House, The Adventures of Snelgrove Snail (“OCEANQUAKE!”) and Shantytown (produced by ATV for Maritime viewers), and the CBC Halifax-filmed Bixby and Me. (“RE-LAAAAX…”)