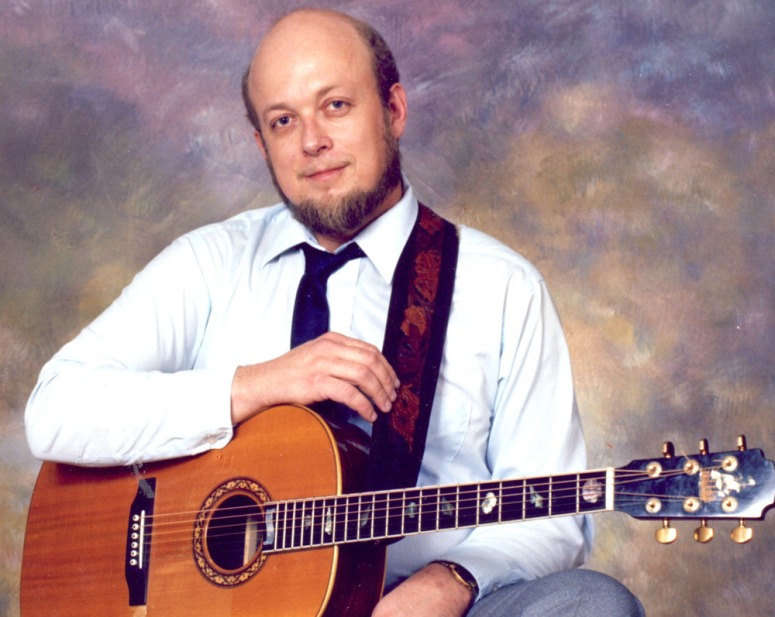 As I celebrated my fourth birthday on September 25, 1976, with cake and cousins aplenty at my party in Grande-Greve, I had no idea that a young man from Hamilton, Ontario had spent the previous two days recording his first album – a collection of songs that would have a major impact on my life, even though I wouldn’t discover them until years after their release.

That man, who was two months shy of his 26th birthday, was Stan Rogers – the album, Fogarty’s Cove.

Now, before I go any further, a potentially-surprising disclaimer: I didn’t hear a single song from this album – or any Stan Rogers song – in its entirety until the end of my 1990 frosh week at the University of King’s College in Halifax. The last group to take the stage at our frosh variety show in the H.M.C.S. Wardroom Pub boldly announced that their final number was “the King’s anthem” – and then my ears first heard all nine verses (and choruses) of “Barrett’s Privateers,” the sea shanty to end all sea shanties, which has followed me around in one form or another for over a quarter century.

I’ll admit here and now that I have a love-hate relationship with “Barrett’s.” It’s a classic song, no doubt, with an irresistible melody, immediate audience accessibility via its fist-pounding chorus and the repeating verse line “How I wish I was in Sherbrooke now,” and a smartly-crafted rhyming recollection of an ill-fated sea voyage to Jamaica. And if I’m in the right mood, with the right people, it’s a lot of fun to sing (although I’ve spent the past decade substituting the chorus-opening line “G– d— them all” with “I curse them all”). I even finished my university days by crafting a parody of the song, “The Last of My King’s College Years.” (They didn’t even throw me out when I sang it at a jam session in the college chapel during King’s 225th anniversary celebrations in 2014.)

Over the years, as a musician and a music lover, I’ve often dubbed “Barrett’s” the “American Pie” of Atlantic Canadian pub songs, for several reasons. Like the Don McLean classic, “Barrett’s” often sparks a wild audience reaction from its first line (“Oh, the year was 1778…”) but has trouble sustaining that enthusiasm over its multiple verses. Both songs, while high in quality, have been overused to the point of obscuring the rest of each artist’s lengthy, diverse music libraries. (The now-defunct Nova Scotia pub band Highland Heights once rushed through “Barrett’s” during a PEI performance, and according to legend, were questioned about the tempo by an audience member who then claimed she was “as sick of that song” as the group members were, before casually introducing herself as Rogers’ widow Ariel.)

Love it or hate it, there’s no denying that “Barrett’s” is a curious beast. According to this breakdown of the song, most of the lyrics are indeed grounded in historical fact, with the remaining words the product of Rogers’ imagination (including the description of the ship’s cook having “the staggers and jags” as a substitution for the bulky phase “delirium tremens”).

Of all the elements that led to the song’s launch, however, I’m most intrigued by Rogers’admission that he wrote “Barrett’s Privateers” after participating in a song session at the Northern Lights Boreale Festival in Sudbury and feeling a pang of jealousy towards musical colleagues The Friends of Fiddler’s Green, who always seemed to have an a cappella shanty in their back pockets. Young Stan wasn’t looking to paint the definitive portrait of Atlantic Canada’s Golden Age of Sail; he simply wanted a cool song to sing.

That’s one of the reasons I still find Fogarty’s Cove – the album and the song – so remarkable after all this time. It’s not the product of a cocky young man trying to revolutionize the Canadian music scene; there’s certainly a layer of brashness in the opening track, “Watching The Apples Grow,” in which Rogers pens a quirky Valentine to Nova Scotia’s Annapolis Valley while simultaneously grousing about his native Ontario, “Your scummy lakes and City of Toronto don’t do a d— thing for me; I’d rather be by the sea.” But it’s punctuated by a cheerful fiddle ‘n’ folk arrangement and Rogers’ near-yodels in the latter choruses. He couldn’t possibly have the evil musical establishment in his sights – he’s having too much fun for that nonsense.

He’s also focused on sharing Nova Scotia’s Guysborough County, especially the county’s southeastern tip and communities like Canso, Halfway Cove, and Queensport with the world. Yes, Queensport, as in “we just lost sight of the Queensport Light,” the opening line of the snappy title track “Fogarty’s Cove.” Queensport is indeed a real place, unlike Fogarty’s Cove itself, a distinction Rogers makes in the album’s liner notes, where he also lovingly recalls his summers spent visiting his mother’s relatives in the fishing villages sprinkled around Chedabucto Bay.

And, besides, the song is fun to play, on pretty much any instrument. I’ve played it in my own sets for the better part of two decades – it carries a surprising lightness for the tale of a fisherman whose wife “cries when I’m away to sea, nags me when I’m with her, she’d rather I’d a government job or maybe go on the dole.” If nothing else, it’s a couple of minutes shorter than “Barrett’s Privateers.” 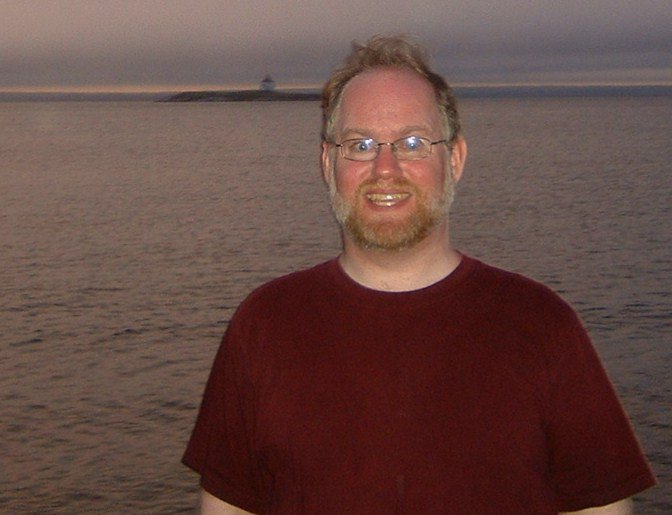 (Above: Standing on the coastline in front of the actual Queensport Light. This photo was taken by my wife Cathy as we headed home from the 2011 edition of the Stan Rogers Folk Festival in Canso.)

These communities and their never-say-die attitude in the face of a changing Atlantic fishery are also celebrated – and, to a degree, mourned – in other Fogarty’s Cove tracks, including “Fishermen’s Wharf,” the album-closing poem “Finch’s Complaint” (which depicts an angry Canso fish plant worker preparing to move his family to Toronto in the wake of a reneged promise by Nova Scotia’s Premier of the day, Gerald Regan),  and one of my longtime favourites, “Make and Break Harbour,” a heartbreaking tale of the growing prominence of bottom-scouring dragger ships and out-of-country vessels that transformed the Maritime fishery, and not for the better, in the ’70s and ’80s.

Strangely, “Make and Break Harbour” took hold in my own heart in 1995, over a decade after Rogers’ 1983 death and three years after the Atlantic cod moratorium that resulted from a quarter-century of dragger culture, overfishing and general depletion of the cod stocks. You might remember a previous blog post about the pub gigs I played in L’Ardoise with a group of friends after graduating university; we didn’t draw big crowds at The Fleur-de-Lis Beverage Room, but about 20 minutes into the set, out there in the darkness, we could count on hearing a small but determined Acadian female voice insist: “Play my song.” She wanted “Make and Break Harbour,” and week after week, we delivered. (It didn’t hurt that a “Remembering Stan Rogers” tribute concert held only a few months earlier at the Rebecca Cohn Auditorium in Halifax included a powerful cover of the song by PEI native Lennie Gallant, which still brings tears to me eyes 22 years later.)

But I’m also grateful to the Fogarty’s Cove album because it introduced me to the tender, heartfelt love song “Forty-Five Years.” Somewhere in the middle of the self-absorbed ’70s, aka. “The Me Decade,” the young fellow from Hamilton painted a frank, honest picture of a lovesick lad struggling for the words to properly woo his beloved. He even added a verse that addresses the loneliness every solo musician must have felt – and which I have definitely felt – prior to finding his soulmate.

“So alone in the lights on stage every night, I’ve been reaching out to find a friend/Who knows all the words, sings so she’s heard, and knows how all the stories end/Maybe after the show she’ll ask me to go home with her for a drink or two/Now her smile lights her eyes, but honey, all I see is you.”

Having performed this song countless times since I finally learned it in my early twenties, I found myself singing it in the summer of 2006 in front of the woman who had become my girlfriend only a few weeks earlier. I was backing up a friend and fellow musician, Krysta MacKinnon, on the Pictou waterfront a part of their summer concert series. Cathy had just arrived on the wharf with her sister Deb, who was meeting me and seeing me play for the first time.

I introduced “Forty-Five Years” on that warm summer evening by saying how much it meant to play that specific song in that particular moment, because “now I finally have someone to sing it to.” When it was over, I asked Deb (on the microphone) how Cathy was doing; she hollered back that my girl had “melted through the slats” of the Pictou boardwalk.

We were married just over two years later; over a decade since that magical summer, I still “want to hold her closer than I’ve ever held anyone before” and “want to see her smiling face forty-five years from now.” 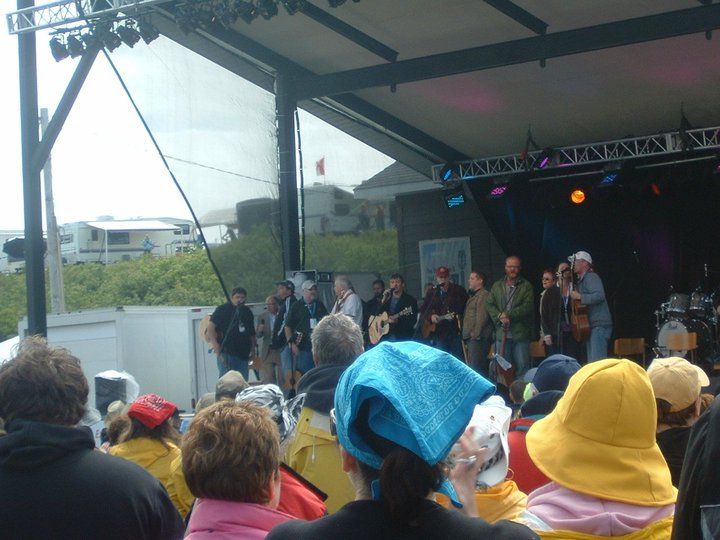 (Above: Stan’s son Nathan Rogers (in the white cap on the right) leads the crowd in the singing of “Barrett’s Privateers” to close out the “Singing Stan” portion of the 2011 Stan Rogers Folk Festival in Canso. The setting aside of one hour on the festival’s final afternoon for a mainstage performance of Rogers classics has been a centrepiece of the festival since its 1997 debut.)