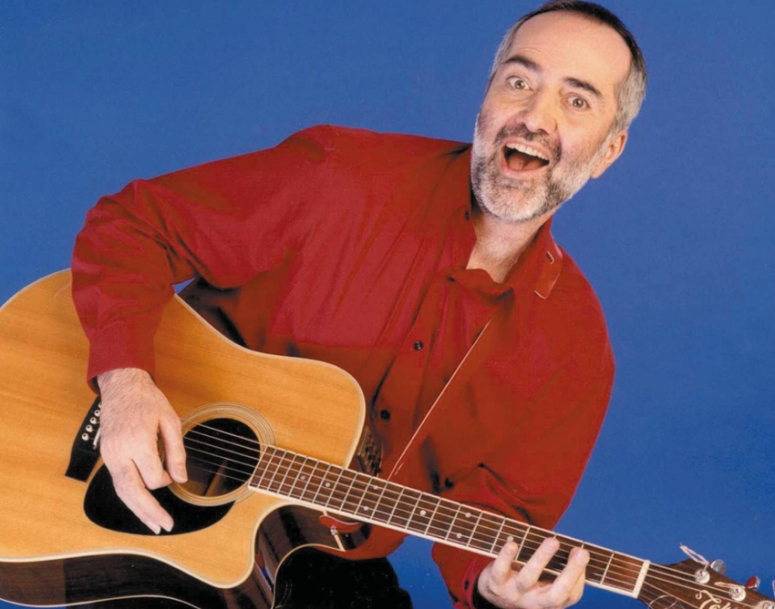 In 1976, as my four-year-old ears were hearing children’s favourites performed by the likes of Big Bird and Mickey Mouse, a folk singer who stumbled into kid-friendly performing by accident was about to revolutionize entertainment for the under-10 set, making a major impact on my musical sensibilities – and my life in general – in the process.

His name: Raffi Cavoukian, known simply by his first name of Raffi for the next four decades. He released his first children’s album, Singable Songs For The Very Young, in 1976, although I wouldn’t hear it for the first time until nearly three years later, as a first-grader. 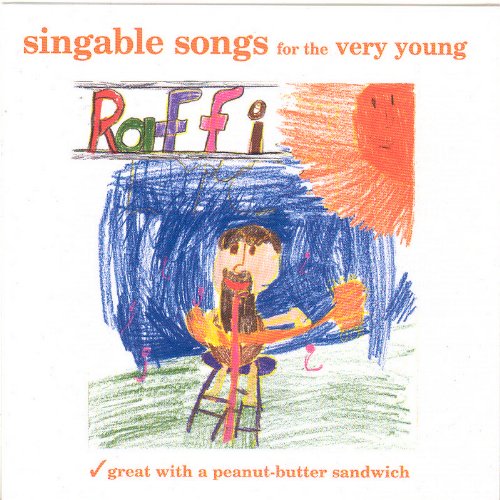 I didn’t discover until this week that Raffi might not have even considered children’s music had he not received an invitation from his future mother-in-law to entertain the students at a nursery school she ran in Toronto. He initially hesitated; having grown up as the son of Armenian parents in the Egyptian capital of Cairo before the family moved to Toronto in 1958, Raffi didn’t get a steady diet of “Old MacDonald Had a Farm” or “Itsy Bitsy Spider.” But perhaps a change of pace appealed to the young guitar-picker, whose 1975 debut album Good Luck Boy wasn’t picking up the traction he expected (which is a shame, because it’s actually quite lovely – listen for yourself).

The nursery-school gig led Raffi to record 14 songs for his first crack at the kiddie-entertainment market, most with sparse arrangements that highlight two of his greatest assets – his rich singing voice, as compelling with adult folk songs as with child-oriented chestnuts like “Mr. Sun” or “I Wonder If I’m Growing,” and his guitar-picking skills. Unlike the previous three decades’ worth of children’s albums, which tended to bog their musical arrangements down with slam-bang hyperactivity or lay on the sugary-sweetness and Very Important Lessons, Raffi got to his pre-school and elementary-age audiences with a finely-tuned vocal technique that alternately tickled the funny bone or plucked at the heartstrings, at all times impossible to ignore.

As a result, Singable Songs For The Very Young still holds up extremely well, over four decades later. Interspersed with the likes of “Brush Your Teeth,” “The Sharing Song” and “Down By The Bay” (the self-deprecating closer, “Did you ever have a time when you couldn’t make a rhyme?”, cracks me up to this day), as well as the catch-’em-all holiday chestnuts “My Dreydel” and “Must Be Santa,” you’ll find my personal favourite, the a-capella “Five Little Frogs” (worth it simply for Raffi’s intro line “On a hot, hot day in July”), as well as the opening number “The More We Get Together.” That last one became so ingrained in Canadian culture that it served as the opening theme music for the first half of the debut season of This Hour Has 22 Minutes. (One of these early episodes also ended with the faux news anchors leading their Halifax studio audience in the title track from Raffi’s third children’s album, “The Corner Grocery Store.”) 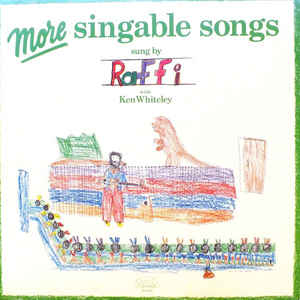 Although he took one more crack at music for grown-ups (with the 1977 album Adult Entertainment – take a listen here, and be blown away by Mr. Bananaphone singing the likes of Stan Rogers‘ “Forty-Five Years”), Raffi’s reputation as a children’s entertainer kept spiraling upward with the release of More Singable Songs in 1977 and The Corner Grocery Store in 1979. More Singable Songs showcased Raffi’s curious straddling of obvious children’s songs with more thoughtful, mature material – sure, I could “Shake My Sillies Out,” dance the “Sodeo” with “the big fat man from Calgary” and go “Workin’ On The Railroad” (in one of the snappiest a-capella renditions of that song that I’ve ever heard, no less), but then Raffi would take me on a journey to “Douglas Mountain” on the “New River Train,” while reminding me that sometimes you gotta sing when the spirit says sing.

He also showed a deeper commitment to a wide range of musical genres from around the world, from “Les Petites Marionettes” and the Brazilian number “Sambalele” on More Singable Songs to The Corner Grocery Store cuts like “Anansi,” “Pick A Bale O’ Cotton,” “Swing Low, Sweet Chariot” and French songs like “Y’A Un Rat/Sur La Pont D’Avignon,” “Frere Jacques” and “Les Zombis et Les Loups-Garou.” Yes, that’s right – Raffi was singing about zombies and werewolves decades before they overloaded the rest of pop culture! That last track even inspired me to write my first original French song, “Le Loup-Garou de L’Ardoise,” in the eighth grade. (No, you don’t want to hear it. Trust me.)

Believe it or not, I still have my vinyl copy of The Corner Grocery Store. I listened to it again a few Sunday evenings ago, and with another busy work week staring me in the face, I found great joy in the album’s title track and great peace in its two closing cuts – a mostly-instrumental version of “Rock-a-Bye Baby” whose only vocals are Raffi’s gentle humming, and the loveliest rendition of “Goodnight Irene“ I’ve ever heard. The chorus is exactly the same as in other recordings, but the original verses (which are actually quite depressing if you take them at face value) are replaced by a lovely rhyming description of various animals’ sleeping quarters. I can’t explain exactly why that album, and those particular songs, still touch me so many years later, but indeed they do. 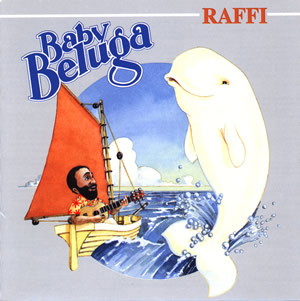 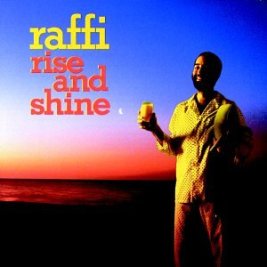 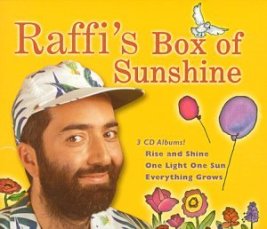 Alas, time marches on, so I missed a lot of the Raffi material that’s most closely linked to him – particularly the Baby Beluga album, whose title track was so popular that it was even parodied in a 1995 MAD Magazine article which opened with a Paul Coker caricature of Raffi and a request for him to include more modern, adult themes in his songs. (Baby Beluga is chased by whalers as a result.) 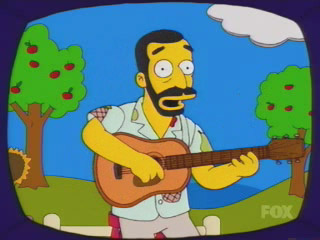 Another satirical juggernaut, The Simpsons, lampooned Raffi in an early-2004 episode in which children’s entertainer “Roofie” enthralls baby Maggie but drives the rest of the family bonkers with such repetitive mush as “One, Two, Tie Your Shoe” and “There’s A Helpful Bear On The 28th Floor.” While Roofie eventually shows a darker side, cutting a Springfield concert short and skipping town in a helicopter, The Simpsons’ writers and producers quickly make it clear that they don’t associate such shenanigans with the spoof’s target, as a news ticker running after this particular scene includes the item “Raffi Denounces Roofie.” 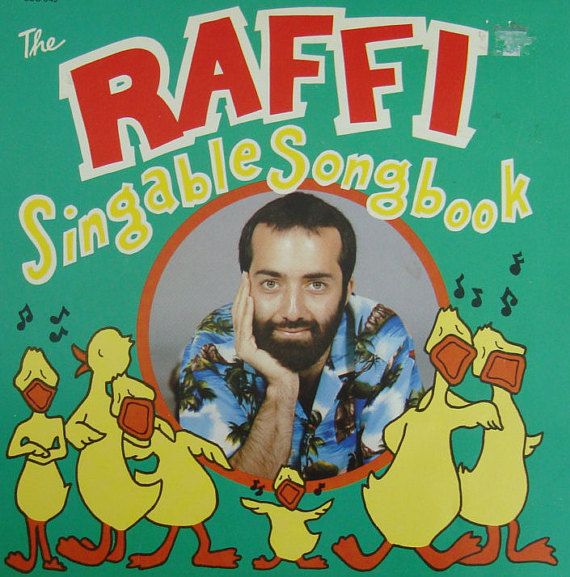 Despite these parodies, I would always have a soft spot for Raffi. That’s partly because my love of his albums during my early school years, combined with his skill at captivating children in concert footage shown in a late-’80s CBC-TV special, inspired me and a few musical friends as we formed a children-oriented music act that performed all over Cape Breton from 1989-91, Kid Stuff. With the help of my Raffi albums and the songbook pictured above, we incorporated a lot of his material (and that of fellow Canadians Sharon, Lois and Bram) into our song list. I seem to recall “Five Little Ducks” and “Peanut Butter Sandwich” (a guilty pleasure of mine in both song and food form) as the Raffi songs that made the biggest impression with our young audiences.

By this time, however, Raffi was reaching beyond his traditional children’s audience to encourage those who had grown up on his albums – and even those who hadn’t – to go green and preserve the environment. So suddenly I was seeing him on the likes of CBC’s Video Hits, singing songs like “Evergreen Everblue” and the Jamaican/rap mash-up “What’s The Matter With Us” (which, among other things, casts Raffi as a football player and a frustrated news anchor). They caught me off guard when I first heard them as a teenager, but as I revisit them a quarter-century later, I find they succeed on both a musical and lyrical level, and Raffi’s message, while occasionally a little on-the-nose, is loud and clear and necessary to hear. 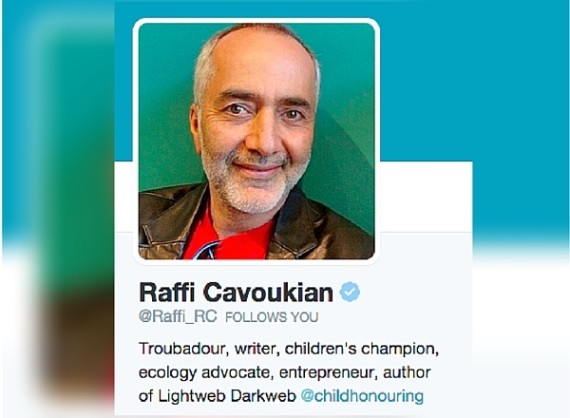 Those late-’80s efforts at reaching adults were only the beginning. Today, in the digital age, Raffi not only cautions about the dangers of life online via his book and accompanying Web site Lightweb Darkweb (just one of many portions of his Centre for Child Honouring), but he has put his Twitter account to work in raising political awareness among the former children (and Raffi record-buyers) that he now describes as his “Beluga Grads.” It would be one thing if he was occasionally encouraging his 39,400 followers to reduce greenhouse grasses or separate their recyclables; instead, during the summer and fall of 2015, he tweeted over 3,400 messages specifically related to Canada’s federal election campaign, with the grand majority of these urging the defeat of then-Prime Minister Stephen Harper. During the same election campaign, Raffi also took to YouTube with the election-themed song “I Want My Canada Back.”

(Note: I was originally planning to describe Raffi’s Twitter frequency as “Trump-like,” but he doesn’t particularly care for The Angry Orange, having thrown his support behind Vermont Senator Bernie Sanders during the 2016 Democratic primaries. Similarly, Raffi hasn’t officially stumped for Green Party Leader Elizabeth May – who happens to be the MP for his British Columbia riding – but told The Globe and Mail in 2015 that he was voting Green in the election that did indeed see Harper’s defeat.)

Now, I’m sure this hyper-political approach doesn’t please everybody, particularly not Conservative supporters (I have an odd image of middle-aged Harperites sadly tossing out their copies of Baby Beluga as I ponder all of this). Maclean’s magazine columnist Paul Wells even called Raffi a “flatulent crank” on Twitter during the 2015 election campaign, although Wells has since described that remark as “terribly inappropriate,” adding: “My manners fail me, regularly.” Raffi has remained largely unapologetic about his political-themed social media activity, famously declaring that “democracy is not a spectator sport.” (His Twitter comments cut across party lines; Raffi took on B.C. Premier Christy Clark during her 2012 squabble with that province’s teachers’ union and recently suggested that current PM Justin Trudeau “let Canada down” by backing away from his electoral-reform campaign promise of 2015, in a move that “makes Canada’s young cynical.”)

But, as a young man who was touched early on by Raffi’s not-quite-kids’-music and the notion that “you gotta sing when the spirit says sing,” I’ll applaud him for upgrading that lyric to the concept that “you gotta tweet when the spirit says tweet” – and for using every means possible of connecting with his massive audience to make “C-A-N-A-D-A” – and the world – better. 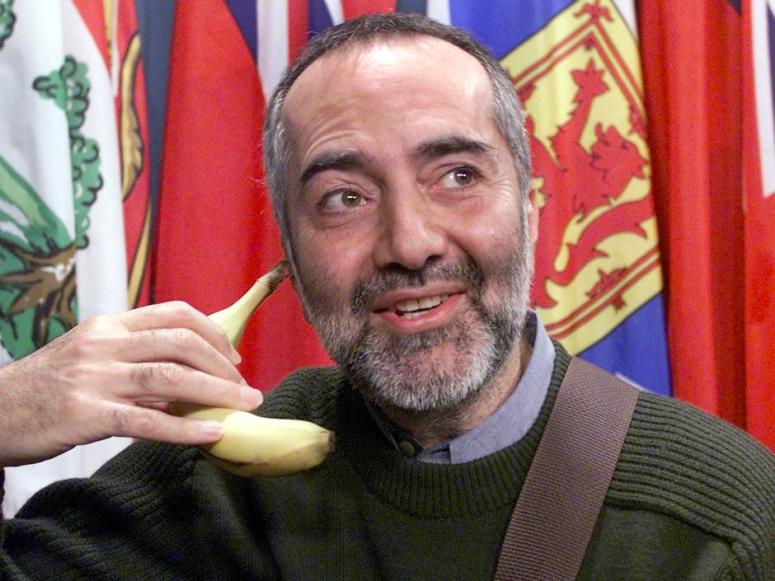