I turned three years old on September 25, 1975, and the CBC gave me a present – or, more accurately, they actually gave it to the entire country on my behalf. But I’m still tickled to know that I share a birthday with that rarest of beasts, the successful Canadian sitcom.

King of Kensington, following the wacky weekly adventures of Toronto convenience-store owner Larry King, began its five-year run in the fall of 1975. The show, starring Al Waxman as Larry and Fiona Reid as his wife Cathy, was an immediate hit; prior to the launch of the fourth season, one of its producers reported that 1.5-to-1.8 million people were watching King of Kensington every week.

Now, if you’re reading this anywhere outside of Canada, particularly in the United States, I can confirm that those are actually great numbers for a Canadian-produced show. As a contrast, consider that the first season of The Kids In The Hall on CBC was considered successful with an audience of roughly half a million; the most-watched TV broadcast in Canadian history is CTV’s showing of the 2010 Olympics’ gold-medal men’s hockey game between Canada and the U.S., with 16.7 million viewers. (Sports broadcasts make up the all-time Canadian top ten, with hockey filling six of these ten slots.)

It’s also remarkable that King of Kensington did so well because Canadian television in general and the CBC in particular struggled for years to produce quality situation comedies that also struck a chord with Canadian TV audiences. The co-stars of the 19-episode wonder Mosquito Lake, veteran Canadian comedian Mike MacDonald and The Frantics troupe member Dan Redican, joked about it in this rather refreshing promo for the 1987 cottage-country comedy, with Redican even urging viewers to “forget it’s on the CBC, because you’ll like it anyway!” (CBC eventually righted the ship with the likes of Made In Canada, Little Mosque on the Prairie and the arguable heir-apparent to Larry King, Kim’s Convenience, while CTV turned the conventional sitcom on its ear with the quirky Corner Gas, but the ’70s and ’80s were an entirely different story.) 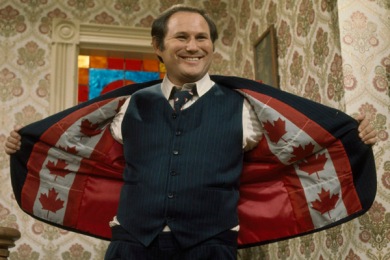 Photo: Al Waxman on location at Kensington Market, Toronto Photography Date: May 1975 Originals are housed at Library and Archives Canada ..

Among the many things King of Kensington gave Canadians, particularly those of us living outside of Ontario: A rarely-seen view of the multicultural milieu that is Toronto, and a peek at the personable, affable acting approach of Waxman, who was genuinely likable as the fallible Everyman that anchored the series. And it also gave us one of the catchiest TV theme songs in Canadian history, a Greek-flavoured anthem in a minor key (hardly typical for TV sitcoms) that saluted everyday big-city life and was peppered with reaction from the folks Larry meets on the streets of Kensington Market. (Years later, at an East Coast Music Awards event in Halifax, I incorporated the King of Kensington theme song into a 50th-anniversary tribute song for the CBC; my friend and acoustic guitarist, Patrick Lamey, nearly cracked me up by piping up, “Hey, King! You owe me money, King!” while I sang.) 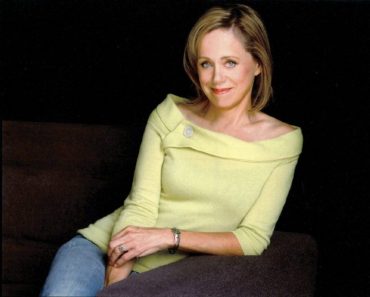 King of Kensington also took a novel approach to Reid’s decision to leave the show after three seasons to pursue her theatre interests. Rather than re-casting Cathy or having her visiting her mother or abducted by aliens, the show’s writers and producers presented Larry King as a recently-divorced man in the fourth and fifth seasons. In 2011, Reid told The Toronto Star that she was “torn” by her decision and, as the famous Joni Mitchell lyric goes, didn’t know what she had until it was gone:

If I hadn’t been so young I would have appreciated it more for what it was. I’ve never quite gotten over the depth at that bonding with an audience that the show created, and for me that was the litmus test that said, ‘Yes, Canadians want to see their own on screens.’

In a bizarre twist, my first exposure to Fiona Reid wasn’t as Al Waxman’s TV wife but as a late-season replacement actress on another long-running CBC sitcom, Hangin’ In, as Reid took the screen time vacated by Lally Cadeau (who would later go on to star in Road To Avonlea). Today, Reid is probably best-known to worldwide audiences as the jittery mother-in-law to fellow Canadian Nia Vardalos in the two My Big Fat Greek Wedding films.

Al Waxman, meanwhile, continued his work on both sides of the border. Along with a whack of commercial endorsements like this one for General Motors (and this one for the Ontario chain Miracle Food Mart), he reached a wider audience through the six-year run of the CBS crime drama Cagney & Lacey, playing the gruff but personable Lt. Bert Samuels. And while he never won an Emmy Award, Waxman achieved something better, something all Canadians, nay, all Earthlings strive for – appearing in MAD Magazine.

(From the parody “Grabme and Spacey,” which originally ran in MAD #267, December ’86. By the way, that’s another Canadian actor, Harvey Atkin, playing the desk sergeant in the second panel. Artist: Angelo Torres. Writer: Dick DeBartolo.)

For my money, my favourite Waxman role is one of his last, as he played the unscrupulous Detroit Red Wings owner Jack Adams in a 1995 CBC-TV movie version of Net Worth, the book that traced the early efforts to solidify NHL players’ rights and the eventual formation of the NHL Players Association. Waxman picked up a Gemini Award for his portrayal of Adams in 1997; at the following year’s Gemini ceremony, he received the Earle Grey Award for lifetime achievement in Canadian television.

Sadly, Waxman died during heart surgery in 2001, just two months shy of his 66th birthday. In 2016, he posthumously received a star on Canada’s Walk of Fame, and the statue pictured below is now a permanent fixture in the Toronto neighbourhood that inspired King of Kensington (despite the best efforts of vandals to turn Waxman into a Batman villain in 2014).

Proclaimed as “a man among men, the people’s champion” in the original King of Kensington theme song, Waxman took those words to heart through his involvement in organizations ranging from Big Brothers and Sisters to the Canadian Cancer Society. And his big-hearted attitude wasn’t lost on King of Kensington guest stars like Mike Myers, who made his acting debut on the show at the age of 12, kept in touch with Waxman (always addressing him as “Mr. Waxman”) and, in the 1997 film Austin Powers: International Man of Mystery, named the Elizabeth Hurley Bond-girl character Vanessa Kensington in honour of Waxman and the show.

One thought on “Canada 1975: All Hail The King of Kensington”