As I reached my third June on the planet, happily discovering the unique joy of peanut-butter sandwiches, the Canadian singles charts were dominated by a legendary rock group that I would only truly discover and appreciate nearly two decades later.

Bachman-Turner Overdrive hit the top of the RPM chart midway through 1975 with the delightfully-cheeky “Hey You,” becoming the only Canadian group to top the domestic charts that year. (Bizarrely, the only other Canuck act to reach the #1 position during that twelve-month frame was crooner Paul Anka, who did it twice – in May with “I Don’t Like To Sleep Alone” and again with “I Believe (There’s Nothing Stronger Than Our Love),” just two weeks before I turned three years old.)

This might astonish a lot of you, but I didn’t hear and/or enjoy a full BTO song until nearly 20 years after “Hey You” hit #1, and that song wasn’t even “Hey You” – it was the rock anthem considered by many to be BTO’s (and Randy Bachman’s) signature song, “Takin’ Care of Business.” That one landed on an album of “hockey arena songs” released by the NHL in 1992 to celebrate its 100th birthday, and I found myself enjoying it during my later years in the King’s College School of Journalism. (I have vivid memories of playing “Takin’ Care of Business” on my King’s-issued tape recorder while on the way back from assignments in different parts of the city. If you lived in Halifax circa 1993 and remember seeing a skinny young blond dude with thick glasses belting out  “AND WORKIN’ OVERTIME, WORK OUT” on the corner of Spring Garden Road and South Park Street while waiting for the light to change, the odds are fairly high that it was me, and I apologize in advance.)

A couple of years later, while working my first journalism job at Port Hawkesbury radio station CIGO-AM (now 101.5 The Hawk FM), I finally got serious exposure to the BTO hit list courtesy of the lunchtime classics show. Occasionally my newsroom partner and I would snicker at and/or mock BTO’s unconventional vocal techniques, particularly Bachman’s deliberate stutter-singing on the ’74 chart-topper “You Ain’t Seen Nothing Yet” and his hurried, high-pitched vocal delivery on “Hey You.”  But these songs, as well as “Let It Ride” and “Roll On Down The Highway,” won me over and, on my first day of subbing on the CIGO morning shift, I was actually quite jazzed when the morning-drive DJ, Frank “Frankie Hollywood” Martin, officially welcomed me with a radio-themed reworking of “Takin’ Care of Business” by Toronto DJs Jesse and Gene, “Takin’ Care of Listeners.” (You can find it here, at the 4:55 mark of this Soundcloud montage.)

And then, just a few years later, in the winter of 2000, along came this delightful little surprise in an eleventh-season episode of The Simpsons, “Saddlesore Galactica”:

In response to Bart’s question (“Who are those pleasant old men?”) in front of a band stage at a state fair, Homer replies: “That’s BTO. They were Canada’s answer to ELP. Their big hit was TCB.” Answering a confused look from Bart: “That’s how we talked in the ’70s. We didn’t have a moment to spare!”

And then comes this scene that rings too true for pretty much every single performing musician on the planet, including me: Randy Bachman greets the Springfield fair-goers and promises that BTO will play “all your old favourites” after a brief sampling of the band’s new album. (Which is an odd line, considering the most recent album containing new BTO material would have been 1996’s Trial By Fire: Greatest and Latest release.) Homer refuses to listen to the new material and brays for “Takin’ Care of Business”; the band’s barely through the first line when Homer hollers, “GET TO THE WORKIN’ OVERTIME PART!” Bachman and longtime bandmate Fred Turner briefly grumble before granting Homer’s request, perhaps playing on the classic Canadian politeness-to-a-fault stereotype while Homer gleefully dances away, earning the scorn of the crowd and pretty much scaring off his leery son.

All of this is more remarkable considering that, according to some sources, Bachman and Turner weren’t even speaking to each other and recorded their lines for The Simpsons separately, still generating a performance that, according to episode writer Tim Long, “thrilled” The Simpsons’ staff: “They could not have been nicer.” But the pair have patched things up and still tour and record regularly, as you can see by the above photo and this official Web site. The duo also joined former BTO members Robin “Robbie” Bachman (Randy’s youngest brother) and Blair Thornton, reuniting the line-up from the 1974 hit album Not Fragile to be inducted into the Canadian Music Hall of Fame during the 2014 Juno Awards. 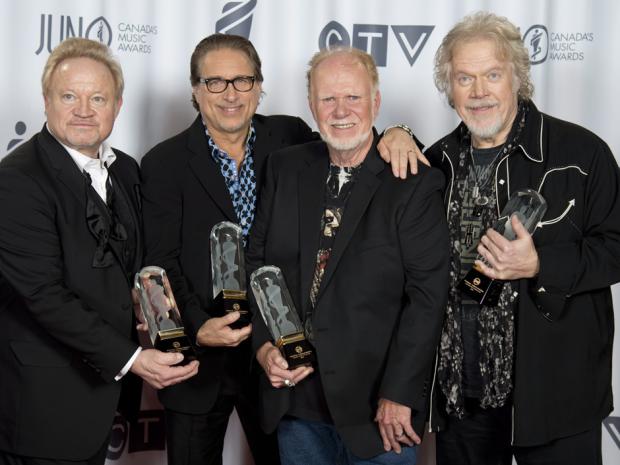 While Bachman has struggled through the years with various members of BTO and The Guess Who over everything from rightful ownership of those band names to copyright issues regarding their respective music catalogs, he has my respect today for everything from the above-mentioned BTO “induction reunion” to his 2007 collaboration with former Guess Who band-mate Burton Cummings (who Bachman reportedly dissed in the lyrics to “Hey You,” right down to the final chorus’s brief nod to The Guess Who’s “No Time“).

Besides, Bachman seems to be loosening up and having more fun these days. Nowhere is this more evident than on his CBC venture Randy Bachman’s Vinyl Tap, which sees him presiding over two hours’ worth of songs with a given theme, telling stories and occasionally hauling out his guitar and playing/singing along, or deconstructing the song in question to give us all a little music lesson. He’s not only introduced me to a lot of great music that I otherwise would never have heard, but also shown remarkable versatility in his song selection: I nearly drove off the road laughing while hearing Bachman teeing up the Barnes and Barnes novelty hit “Fish Heads” by imitating his son gaily singing the song as a youngster.

Note: If you need some more “eclectic BTO” to cleanse “Fish Heads” out of your brain, may I direct you to Bachman’s Christmas-themed version of “Takin’ Care Of Business” – either as a soloist or with Canadian country star Beverly Mahood – or this recent parody by CBC’s This Hour Has 22 Minutes, centering on the disastrous Phoenix payroll system and its missed deadlines for compensating federal civil servants.