Today, though, I’d rather talk about the fellow on the left of the photo, which was taken prior to the federal leaders’ debates during the 1968 election campaign. You see, that man was Premier of Nova Scotia for eleven years before he decided to take on federal politics, and he came incredibly close to toppling the legendary Trudeau in an election held just over a month after I was born in 1972.

That man is Robert Lorne “Bob” Stanfield, the leader of Canada’s Progressive Conservative party between 1967 and 1976 and the man many describe as “the greatest Prime Minister Canada never had.”

To fully frame Stanfield’s impact on politics, provincially and nationally, you have to recall the state of each wing of the Tories by the time he assumed their respective leaderships. The Nova Scotia PCs hadn’t held power since 1933 and didn’t even have a single seat in the provincial legislature by the time Stanfield became their leader in 1948. Only eight years later, in 1956, he brought the PCs back from the dead in the first of four straight election victories. In 1963, Stanfield’s Tories won all but four of Nova Scotia’s legislature seats; four years later, in what would prove to be Stanfield’s last election campaign, the party took 40 of the 46 ridings up for grabs.

Despite Stanfield’s many accomplishments, including modernization of Nova Scotia’s road system, introduction of a network of vocational schools that would evolve into the Nova Scotia Community College, and the launch of Halifax’s Neptune Theatre in 1963, he left provincial politics shortly after his 1967 election victory and, as depicted by The Chronicle-Herald cartoonist Bob Chambers in the cartoon seen above, threw his kilt in the ring for leadership of the national PC party. (The long johns represent one of the most-beloved inventory items of the family business, Stanfields Limited, still based in the former premier’s hometown of Truro, Nova Scotia to this day.) 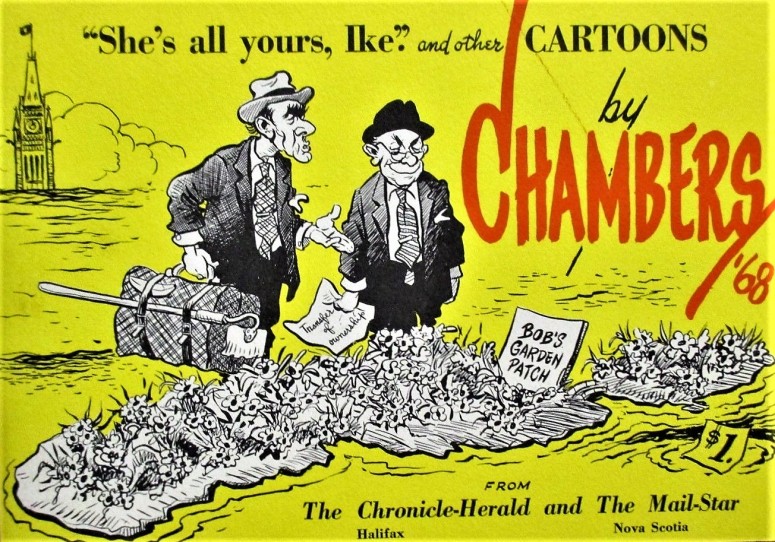 The federal PC leadership race went to a fifth ballot, perhaps symbolic of the infighting that had plagued the party since its outgoing leader, former PM John Diefenbaker, lost power in 1963. Diefenbaker attempted to retain his leadership but dropped out of the race after finishing last on the first three ballots; Stanfield emerged victorious and handed over the Nova Scotia Premiership to one of his cabinet ministers, George Isaac “G.I.” Smith (seen above with Stanfield in another Chambers cartoon).

The Tories enjoyed a bounce from Stanfield’s leadership, opening up a nine-point lead on the governing Liberals in opinion polls. However, the Grits’ replacement of outgoing PM Lester B. Pearson with the charismatic, ambitious Trudeau turned the 1968 election campaign on its ear, and the Liberals captured a majority government, with Stanfield’s opposition Tories dropping 22 seats in the process. (I suspect his shaky grasp of French didn’t help him in Quebec, where the Liberals captured 56 seats to the PCs’ four.)

Stanfield soldiered on, however, and the lanky Nova Scotian’s support of Trudeau measures like the Official Languages Act and the Liberal government’s introduction of official bilingualism for Canada may have done more good for the federal Tories than many inside and outside of the PC party might have realized at the time. Beating back a challenge from Diefenbaker loyalists to back the French-friendly measures, Stanfield took on the fight of his political life in 1972, challenging what he described as Trudeau’s mismanagement of the Canadian economy. The numbers seesawed back and forth all through Election Night (early returns showed the Tories leading the Liberals in the seat count) and, when the dust settled, the Liberals were humbled with a 109-seat minority government result, only two seats ahead of Stanfield’s PCs. 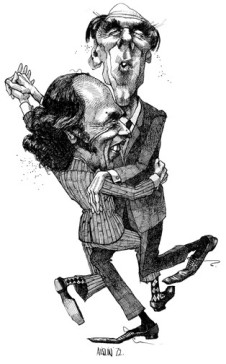 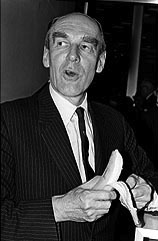 (Left: A famous illustration of minority-era Trudeau and Stanfield by The Montreal Gazette’s legendary cartoonist Terry Mosher aka. Aislin. Middle: A defining image of Stanfield, comfortable enough to eat a banana while facing a scrum of Parliament Hill reporters. Right: Bob Chambers of The Chronicle-Herald plays up the banana connection as Stanfield prepares to hand over the leadership at the party’s 1976 convention.)

Few political commentators outside of Atlantic Canada seemed to know what to make of Stanfield. In his book Eighteen Men, chronicling Canada’s prime ministers from 1867 to 1985, author Gordon Donaldson declared that the Truro native “did not look like a man for tomorrow,” adding: “Stanfield’s lugubrious face reflected generations of Maritime gloom. His lean form seemed built for the unshrinkable long johns the family looms in Nova Scotia had made famous. Few knew that the private Stanfield was a cheerful man with a rich, wry sense of humour.”

Trudeau’s minority government lost a budget vote in 1974, triggering a late-spring/early-summer election campaign that some pundits gave the Tories a fair shot at winning. However, the seemingly-vulnerable Trudeau got a pair of gifts, one from Stanfield himself and the other from the national media. The Tory leader may have handed the election to PET on a platter when he announced a 90-day freeze on Canadian wage and price increases in an effort to combat inflation. Trudeau described the move as “a proven disaster” and even members of Stanfield’s own party distanced themselves from the policy in the dying days of the election. (I don’t think I have to tell you which party leader wound up launching wage and price controls less than 16 months after he was re-elected with a majority government.)

The second gift to Trudeau came courtesy of a seemingly-harmless photo opportunity during a campaign stop in North Bay, Ontario near the end of May 1974. Photojournalist Doug Ball captured these four images of Stanfield tossing, catching, and fumbling a football. Of the four photos pictured above, take a wild guess which two ran on the front pages of newspapers across Canada on the final day of May.

Having lost the election and 21 Tory seats, Stanfield made a graceful exit in early 1976, paving the way for the man who would become Canada’s next prime minster (albeit for only nine months), Joe Clark. But Stanfield remained active on the political front, and waged one last battle with Trudeau in the late ’80s and early ’90s with passionate defenses of the Meech Lake and Charlottetown Constitutional Accords that made an impact on my teenage self, even though I was beginning to see Trudeau as one of my personal heroes during those high school years.

How much sway did Stanfield have on political discourse in his retirement years? A Nova Scotia newspaper columnist, fed up with the acrimony over national unity in 1990, declared that even Quebec separatists could do a better job in a cheeky column entitled “Give me Jacques Parizeau, for the good of the country.” One phone call from Stanfield was all it took for this columnist (name withheld out of professional courtesy) to meekly withdraw his statements the following week and push for the approval of the Meech Lake Accord until its dying days in the early summer of 1990.

He passed away just prior to Christmas 2003, and today Robert L. Stanfield has two honours that can never be taken away from him – being named to Canada’s Privy Council in 1992 and thus earning the title of “Right Honourable” even though he was never elected Prime Minister; and having his name adorn the international airport located just outside of Halifax. (His face can be found on the airport’s observation deck, as you can see below.)

So today we salute “Banana Bob” Stanfield – his political career was over before I even turned four years old, but he flew higher and farther than many of us ever dreamed throughout our entire lives. Thank you, sir. 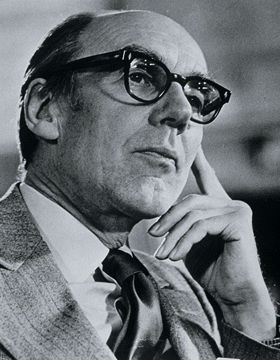