Once upon a time, not long ago and not far away, a little boy focused his two-year-old eyes on a picture tube for the first time and found TV to be a pretty noisy place.

It was 1974, and television – particularly children’s television –  was colourful and chaotic. Sesame Street changed the educational landscape as quickly and dramatically as Jim Henson’s wild-eyed Muppets changed from one scene to another on a typical episode. Saturday morning cartoons were getting bigger and brasher, from the Hanna-Barbera line-up – represented for me by Fred Flintstone, the very first TV character to ever register in my little brain – to the original Spider-Man series (jointly produced in Canada and the U.S.) and that bizarre Canadian cultural touchstone, Rocket Robin Hood.

And yet, the two children’s TV personalities that so many of us remember so fondly were two gentle fellows who were lured to the CBC after enjoying minor success in the States – Mr. Dress-Up (who I’ll discuss later this week) and a character whose longevity in Canadian pop culture almost defies description, The Friendly Giant.

The first time I got a look at “that big boot” and got Bob Homme’s official invitation to come into the castle – getting my choice between one of the little chairs, a big armchair to curl up in, or a rocking chair “for someone who likes to rock” – I had no idea that this kindly, soft-spoken fellow had been honing this character for nearly two decades.

The Friendly Giant made its debut in 1953 as a radio program on WHA-AM, a station owned by the University of Madison-Wisconsin, and quickly moved to the airwaves of sister station WHA-TV. As you can see by this archival footage, the format and the characters – including Rusty the Rooster and Jerome the Giraffe – are pretty much the same as in their CBC incarnation, even though Homme doesn’t seem like he’s fully slipped into the Giant’s persona just yet.

Fast-forward to 1958: The head of CBC’s children’s television division, Fred Rainsberry, invites Homme to move the show north. There, he’s joined by puppeteer Rod Coneybeare, who plays deep-voiced Jerome and squeaky-toned Rusty for an astonishing 3,000-plus episodes over the following 27 years. 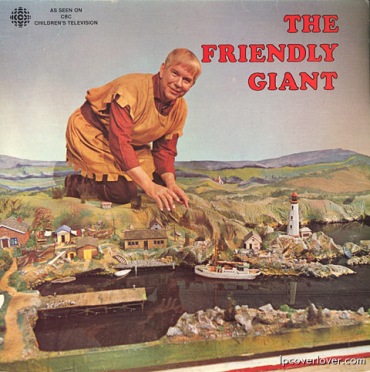 Why did it work? Why does it continue to work, even for adults like me who now appreciate the show on a different level than we did as children? Well, it has a lot to do with the spontaneous nature of the dialogue; Homme and Coneybeare didn’t micro-manage The Friendly Giant, and instead let the episodes flow freely from a basic one-page description of the day’s theme.

I was also touched, as a child and an adult, by the series’ commitment to sharing music with its young viewers. If that observation began and ended with the lovely opening and closing theme, an instrumental version of the 18th-century English folk song “Early One Morning” (played by Homme on his pipe and John Duncan on the harp), that would be enough. But the grand majority of episodes celebrated a wealth of musical cultures and genres – jazz, ragtime, classical and folk. It defies logic that a children’s show set in a giant’s castle would go to the trouble of celebrating “Music of the World” (including Mozart and Chopin), “Two Pipes and a Bassoon,” or themes ranging from “Music About Toys” to “Music About Summer.” And yet, that’s exactly what The Friendly Giant and his puppet friends (including Rusty, Jerome, and a gaggle of session players ranging from raccoons to cats) did for over a quarter-century.

The Friendly Giant ended its lengthy run in early 1985, and to this day, no one knows exactly why. Cuts to the CBC budget by the newly-elected Progressive Conservative government of Brian Mulroney were initially fingered as the culprit, although CBC executives vehemently denied it. In 1988, the CBC’s vice-president of English-language TV, Denis Harvey, told me in a letter that Homme’s age (he was 66 at the time) and health were a key factor in the series’ end.

Bizarrely, during that same year, two CBC productions unveiled a pair of childhood-wrecking Friendly Giant parodies. The satirical radio show Double Exposure featured “The Friendly Flora,” in which the Tories’ Minister of Communications at the time, Flora MacDonald, unveiled a model of the CBC’s then-new Toronto broadcast centre that was derided by Rusty as a pre-election gimmick; MacDonald responded by pulling the drawstring on the rooster’s traditional “book bag” just a wee bit too tightly. That turned out to be small potatoes compared to an edgy spoof that ran on the Halifax-based CBC-TV series Codco, in which Tommy Sexton (below, left) gave the Giant an eerily-psychotic edge as he carried out various ugly crimes on Rusty and Jerome. (Most of that Codco sketch is here, without later segments that showed the “Unfriendly Giant” and fellow CBC children’s personality Chez Helene getting arrested after blowing up and/or cooking other puppet animals.)

However, the best-known skewering of The Friendly Giant – which still carries its own loyal fan base today – is the brainchild of Toronto DJ Tom Rivers (above, right), the nationally-syndicated radio spoof The Unfriendly Giant. Unlike Sexton, Rivers didn’t try to impersonate Homme but instead gave the show’s traditional elements – including its opening theme, the castle setting, and Rusty and Jerome – a PG-13 environment. The children’s books were replaced by, as Rivers described them, “ribald tales” (or as much of a “ribald tale” as you could get away with telling on commercial radio circa 1990 if you weren’t Howard Stern); a running gag had the Giant throwing Jerome out the castle window; and all but a few episodes ended with Rusty served up on Unfriendly’s dinner plate.

Surprisingly, there’s no record of Homme, Coneybeare or anyone from the CBC slapping Rivers with a copyright infringement lawsuit, so The Unfriendly Giant had a surprisingly-long run, and in the process turned out a few episodes that still make me laugh to this day, including “Giant of the Opera” (with Rusty auditioning for Unfriendly’s attempt to recreate The Phantom of the Opera) and even a parody of Wagner’s “Ride of the Valkyries” that owes as much to Chuck Jones’ classic Bugs Bunny cartoon “What’s Opera, Doc?” as it does to The Friendly Giant.

Weirdly, the Friendly Giant comedy bit that finally got someone angry enough to take action aired on CBC in 2007, during the Gemini Awards, Canada’s annual salute to its TV industry. Somebody got the bright idea to include the actual Rusty and Jerome puppets in the “Felt For Feelings Retirement Home,” which also featured everybody from Basil Bear (a Muppet character designed for Sesame Street‘s Canadian inserts and the CBC spinoff Sesame Park in the ’90s) to Colonel Cluck from Today’s Special and Polkaroo from The Polka Dot Door. (Casey and Finnegan were depicted as being locked inside Mr. Dress-Up’s Tickle Trunk.)

As you can see from this link to the sketch, Rusty and Jerome got a big laugh and wild audience applause, but the estate of Bob Homme – who had passed away in 2000 at the age of 81 – wasn’t laughing. Homme’s heirs pulled the Rusty and Jerome puppets from the Friendly Giant exhibit at the CBC’s Toronto headquarters, and unless someone acts as a go-between, it’s unlikely that we’ll see them again anytime soon.

Which is too bad, especially with the passing of puppeteer Rod Coneybeare earlier this week. Because the legacy of The Friendly Giant – the idea that children deserve the respect of all they encounter and ought to experience the joys of music and culture from a young age – is worth preserving. And so are the five-foot-11 “giant,” rooster, giraffe and Jazz Cats that made it all happen.

(This is the actual castle model and background for the original Friendly Giant shows, still on display at the CBC headquarters in Toronto today. And yes, that’s the cow that kept jumping over the moon during the closing credits.)