As Cathy and I pack up our Christmas CDs and tapes (yes, tapes) for another year, it’s impossible for me to look back on the music that fills my holiday memories without saluting the woman responsible for so much of my development as a musician and a person in general.

So I’m dedicating this blog post to someone who was not only a teacher and mentor during my childhood years at Ecole L’Ardoise in Richmond County, Cape Breton, but also became a treasured friend and supporter throughout my adult years, Nancy Sampson. 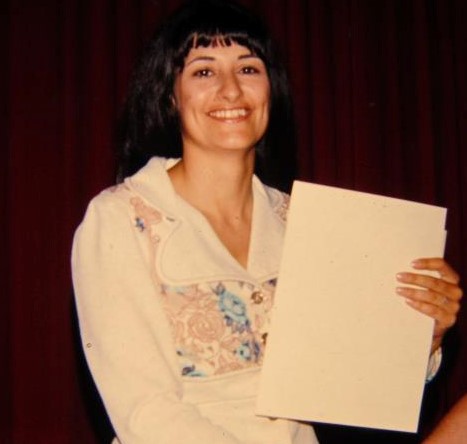 Until she became my cursive-writing teacher in the third grade, I only saw “Miss Nancy” sporadically and had a vague idea that she was the mother of one of my classmates, Tanya Adamsson (now Tanya Ruppell). The two of them shared common features over the years; the five-year-old version of me determined this one day when Nancy knocked on the door of our Grade Primary classroom and I blurted out, in a moment that has followed me around for the following four decades: “Oh, look! A big Tanya!”

A few years later, in the fall of 1981, I began my Grade Four year by auditioning for the children’s choir that Nancy directed. My performance of “O Canada” did the trick, and soon I was joining roughly two dozen other Ecole L’Ardoise students to sing at regular Catholic Mass services at Holy Guardian Angels Church, and to perform at school functions such as the school’s annual Christmas concert.

It was at these December events that I got my first glimpse at “Miss Nancy’s” wide-ranging musical tastes and her skill at encouraging a bright, colourful, unified vocal and musical performance from the diverse group of preteens assembled in front of her. Amid the usual Christmas song choices – “Joy To The World,” “Silent Night” and so forth – we also got the chance to sing such contemporary songs as Kenny Rogers’ “Christmas Everyday” and the John Denver compositions “What One Man Can Do” – which Nancy adapted as “What One Child Can Do” – and “It’s About Time.”

For my first Christmas experience with “Miss Nancy’s” choir, the standout “modern” piece was Chris deBurgh’s “A Spaceman Came Travelling.” Originally released to little fanfare on deBurgh’s 1975 album Spanish Train and Other Stories, the song described Jesus’ birth as being viewed by an alien visitor whose ship “hung in the sky like a star” – with the pledge that the “song” accompanying the events in Bethlehem would “begin once again, to a baby’s cry” two thousand years later.

Reviewing “A Spaceman Came Travelling” with my new college friends during our first year at Halifax’s University of King’s College in 1990, I was struck by the use of prophecy in deBurgh’s lyrics and the concept that this song that was such a vibrant part of my childhood Christmas memories could be interpreted in so many ways, including the possibility of Christ’s return and/or the rapture in the year 2000. It added several layers of new perspective to Nancy Sampson’s inventive and courageous choice of the song for a public school Christmas concert – complete with on-stage depictions of the song’s spacecraft and the visiting alien (both aided and abetted by copious amounts of aluminum foil), not to mention “a mother and child, lying there on a bed.”

(Below: The L’Ardoise Children’s Choir, singing “A Spaceman Came Travelling” and several other songs for the 1981 Ecole L’Ardoise Christmas concert. I believe I’m on the far right of the second row from the top.) 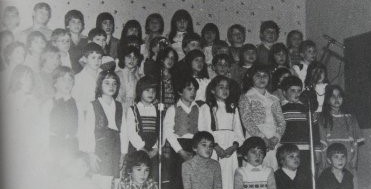 One year after our original performance, “A Spaceman Came Travelling” resurfaced during one of my favourite Christmas musical moments. In December 1982, CBC Radio’s Cape Breton wing sent sound technicians to Holy Guardian Angels Church to record the L’Ardoise Children’s Choir and the additional participants in the school’s Christmas pageant for broadcast on the station’s weekday afternoon show. Everything went smoothly but we could sense some tension in the sanctuary when it came time to record “A Spaceman Came Travelling.”

This was one of the most complicated pieces we had ever attempted as a choir, and even as the smart-alecky grade-school kids that we were, I suspect we wanted to get it right – for the radio listeners, for “Miss Nancy,” for our school, for ourselves. So we took a deep breath, and one of our choir’s three musical accompanists at the time – Ecole L’Ardoise physical education teacher John Kennedy – launched into the opening notes of the guitar arrangement he had prepared for the song a year earlier.

And, somehow, we got it in one take.

How did we know we had “got it”? Well, you see, as soon as the final guitar notes faded away at the end of the song, “Miss Nancy” did a silent but impossible-to-ignore victory dance that rivalled even the NFL’s most boisterous end-zone touchdown celebrations. Never one to keep her emotions bottled up, “Miss Nancy’s” dance of joy is among the most vibrant of my Christmas memories and resurfaces every single time I hear “A Spaceman Came Travelling” – especially the cassette copy of the official 1982 CBC Radio recording that I still have in my music collection to this day.

I suppose I shouldn’t have been surprised at Nancy’s reaction. One day earlier, while we were lining up as a choir to enter the Ecole L’Ardoise gymnasium for the 1982 Christmas concert, some of the students started singing “O Come, All Ye Faithful.” I had been experimenting with vocal harmonies since the previous spring, when Nancy encouraged me and my classmate Rosie Bona to try a high part for “Peace Is Flowing Like A River.” So I thought I might as well try a low harmony for “O Come, All Ye Faithful,” since we were just casually singing it while waiting our turn to go onstage.

About ten seconds into my experiment, Nancy spun around, surveyed her musical troops, and gasped: “Who’s doing that?!?”

The room went quiet. Afraid that I had done something terribly wrong, I timidly put up my hand. Much to my relief, not only had I not committed a punishable offence, I came up with something that would soon find its way into the official choir arrangement of “O Come, All Ye Faithful.” And that’s how “Miss Nancy” led me into a longtime love of lyric harmony that remains with me to this very day.

That was Nancy Sampson’s style – she did absolutely nothing halfway and never passed up a chance to make an impact on a student. It wasn’t always a case of basic encouragement or constructive criticism, mind you; humour was often a key ingredient in her approach. Take the picture above, for example: The student on the left, Shirley O’Toole (now Shirley Downey), dressed up as “Miss Nancy” for an imitate-your-teacher day during the 1985 Ecole L’Ardoise Winter Carnival. The picture depicts the following day’s aftermath – specifically, Nancy donning her student’s wardrobe and curly hair, bursting into the classroom, and starting her lesson with the high-speed speech patterns Shirley used in Grade 7 (and through most of her high school years). As I said when fellow teacher Theresa Clements posted this on her Facebook page, this remains one of the best “prank/counterprank” moments I’ve ever seen at any point of my school days.

That being said, while she enjoyed celebrating what made us unique as kids, Nancy also regularly encouraged us to aim higher. She and Theresa were important mentors when, at the age of 11, I started attending practices for the Holy Guardian Angels Senior Choir and was struck by the harmonies and leadership abilities they showed that year (and for over 30 years afterwards). As well, Nancy wisely took me aside for private conversations during difficult periods of my preteen years when I was falling into negative behavioural patterns that might accurately be described as bullying today. She knew I could be a better person and, because she cared enough to tell me so, I feel that I did indeed become a better person, in the short and long terms.

All of this led up to a sad day in the spring of 1986 when I learned that Nancy had applied for, and received, a transfer to another Richmond County school. I responded in the only way I knew how – by rewriting “Farewell To Nova Scotia” as “Farewell To Nancy Sampson,” recording the whole thing on a cassette, and giving that tape and a copy of the parody lyrics to Nancy on the last day of school. She was extremely gracious and sent me a lovely thank-you note, written in the cursive writing she had so enthusiastically taught us when I was in the third grade. I seem to recall that a couple of my “updated” lyrics weren’t especially flattering, so I’m surprised and somewhat relieved that Nancy reacted in such a positive fashion. 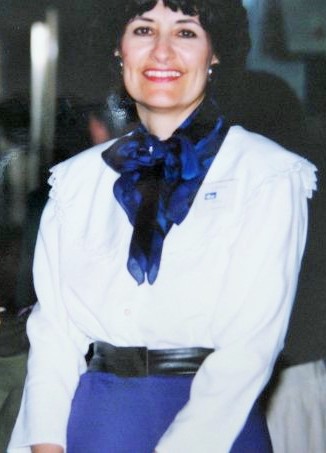 However, Nancy kept up her encouragement of my artistic endeavours well beyond her time at Ecole L’Ardoise. During my three-year stint as an editorial cartoonist for the Port Hawkesbury newspaper that would eventually employ me as a full-time journalist, The Reporter, Nancy faithfully clipped and saved every one of my cartoons and regularly called me up to chat about her favourites. (Samples of those cartoons are available at this Brian Mulroney-themed blog post.)

During the ’90s, Nancy continued to shape my Christmases – and other “home-from-college” periods – as she and her husband Gerry welcomed me to their house in L’Ardoise and encouraged me to play requests on the upright piano. (I seem to recall the Buddy Wasisname and The Other Fellers classic “Chainsaw Earle” being one of Nancy’s favourites during these jam sessions.) And I was always happy to see Nancy in the choir pews – and hear her long-running knack for lovely harmony vocals – whenever I made it back to Holy Guardian Angels Church to sit in with, or give assistance to, the senior choir.

I doubt that there will ever come a time that I don’t look back fondly at those early days in the L’Ardoise Children’s Choir, or that I don’t appreciate how Nancy Sampson expanded my musical abilities and appreciation, my personal self-development, and my growth as an artist, a Christian, and as a person in general.

Thank you, Miss Nancy. And Happy New Year – here’s hoping the rest of the winter has a lot of skiing in store for you.

(Footnote: With the exception of the 2008 photo posted above, most of the pictures in this blog post are due to the diligence of another Ecole L’Ardoise teacher that I’ve already mentioned in this piece, Theresa Clements, who has gone to great lengths to scan and post several memories of the ’70s, ’80s, ’90s and beyond on her personal Facebook page. Thanks to Theresa for her hard work, not just as an archivist but as a mentor and music leader in her own right.)

2 thoughts on “Canada 1986: How “Miss Nancy” Shaped My Christmas Memories”