I’ve been away from this blog for a month now, due to a mix of personal, professional and health reasons. I’m relieved that there has been a little bit of traffic on this site during that time, because it certainly wasn’t my intention to shut down my celebration of Canada.

At the very least, it’s somewhat appropriate that this particular topic is starting Canada Through My Eye back up again. Just as I consider this blog to be a bit of “unfinished business” for me, I could use the same description for former Prime Minister Pierre Elliott Trudeau’s attempts at national unity and his overhaul of the Canadian constitution during his last four years in power.

You see, even though he had already retired from politics after his election loss to Progressive Conservative Leader Joe Clark in 1979, Trudeau returned for one last kick at the can after Clark’s minority Tory administration blew itself up later that same year. As I’ve already discussed on this blog, there seemed to be an inevitability about Trudeau’s Liberal majority win that ended Clark’s nine tumultuous months in office. Greeting party faithful on election night, he grinned: “Well, welcome to the 1980’s.” Following the expected deafening roar from happy Grits, he quoted a Robert Frost poem – Stopping By Woods On A Snowy Evening – that I wouldn’t discover until I read it in my high school English class before the end of the decade: “I have promises to keep, and miles to go before I sleep.”

Some political pundits suggested Trudeau’s rise from the ashes was an effort for the so-called Philosopher King of Canadian politics to write a more flattering professional obituary than those sent his way in 1979. Words like “unfulfilled” were thrown around, even by the likes of George Radwanski, who wrote a best-selling Trudeau biography in 1978. Commentators and ordinary Canadians would write a much different assessment of Trudeau by the time he ended his last term of office in 1984, but these summaries weren’t much more flattering, despite two tangible victories that followed Trudeau’s defeat of Clark in the winter of 1980.

First up: Leading the federalist forces to victory in the May 1980 Quebec sovereignty referendum called by Premier Rene Levesque, which he had been threatening since Levesque’s Parti Quebecois came to power in 1976. I was barely aware any of this was going on as I wrapped up my second-grade studies at Ecole L’Ardoise, and as I look back on the rancorous atmosphere that preceded and followed the much tighter follow-up sovereignty vote in 1995, I’m astounded that I didn’t get even a little referendum primer at school or at the family dinner table during the original dust-up in 1980.

At any rate, despite being childishly mocked by Levesque for leaning towards “the Elliott side” of his full name, Trudeau led the pro-Canada “Non” forces to victory. This wasn’t a decisive win for the True North, Strong and Free, but at least it wasn’t merely a technical knockout – the final count was 59.5 per cent for the “Non” side, and 40.5 per cent for the pro-sovereignty “Oui” side. Levesque told his heartbroken supporters that it wasn’t a matter of Quebec sovereignty dying forever, but merely taking a break before the next battle. “A la prochaine,” he declared – or, in English, “next time.”

This famous photo illustrated the divisions among Quebec residents during the 1980 sovereignty referendum, and these divisions remained – and were inflamed – as constitutional reform routinely crashed and burned in the 15 years before the follow-up 1995 referendum.

Buttons and bumper stickers from the 1980 Quebec sovereignty vote.

As it turned out, the “next time” for Trudeau and Levesque quickly arose as the former invited the latter, and his fellow First Ministers, to hunker down and work out a made-in-Canada Constitution and a Canadian Charter of Rights and Freedoms to replace the British North America Act, which had governed the country since its 1867 launch. Trudeau was thanked for his trouble by receiving only the support of Ontario’s Bill Davis and New Brunswick’s Richard Hatfield for the first constitutional draft. Undaunted, he sought the approval of the British Parliament to bring the constitution home (at one point demanding that sceptical British MPs “hold their noses” to allow his plan to unfold) and then declared that, if Canada was to be broken up by provincial opposition to his constitutional reforms, it was “not worth holding together.”

All of this unfolded against the backdrop of a re-election victory for Levesque and his Parti Quebecois in 1981, and the newly-emboldened leader of Quebec’s separatist forces also found himself leading “The Gang of Eight,” the nickname given to the premiers that opposed Trudeau’s constitutional approach. The “Gang” got a little help from the Supreme Court of Canada, which decreed the proposed constitution and its accompanying charter legal but suggested that it went against constitutional convention by attempting to override the provinces.

Finally, at a hastily-called First Ministers’ Conference in November of 1981, the Prime Minister launched a new tactic: Nail down the actual constitution, set a two-year deadline for finishing the charter and a constitutional amending formula, and put the whole thing to a national referendum if the deadline expired without a deal. Levesque liked those odds, figuring a majority of Quebec voters would turf the Trudeau plan in a yes-or-no vote; the other premiers were, according to some historians, “horrified.” (In his 1993 book Memoirs, you can almost hear Trudeau chortling when he describes this turn of events: “The cat was now among the pigeons!”)

And that gave us one of the strangest single evenings in Canadian history, described by many as “The Night of the Long Knives”: Federal Justice Minister (and future Prime Minister) Jean Chretien, Saskatchewan Attorney-General (and future Premier) Roy Romanow, and Ontario Attorney-General Roy McMurtry concocted a strategy that eventually won over both Trudeau and every premier except Levesque over the following 24 hours.

The Quebec premier didn’t verbally respond to the document placed in front of him at the official signing ceremony; he got up from his chair and left without a word. Later, in front of media microphones, Levesque grumbled in French: “Trudeau m’as fourre.” (I’m too polite to give you a direct translation, but I think you can do the math yourself.) A few years later, in his autobiography, Levesque wrote: “We had been betrayed, in secret…Behind his Oriental impassivity, one could feel Trudeau literally rejoicing. He had put one over us.” 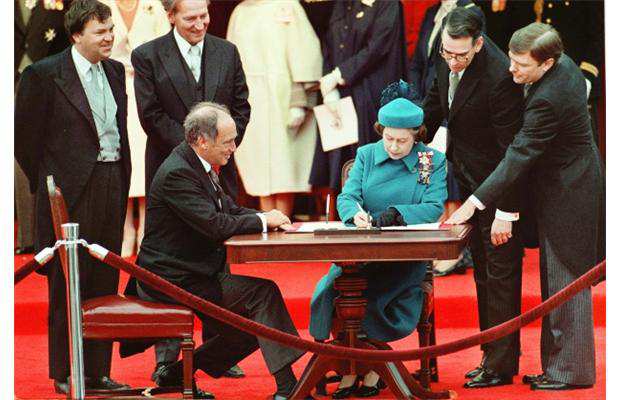 And so it came to be, on April 17, 1982, that Queen Elizabeth II was greeted in front of the Parliament buildings in Ottawa to sign a constitution that didn’t have the signatures of all ten provincial premiers (or, it should be noted, either premier of Canada’s northern territories, which numbered two at the time). Levesque marked the day by ordering his province’s Quebec flags to be lowered to half-mast.

Years later, Trudeau remained unrepentant about denying his own home province the chance to be a full constitutional signatory, and placed the blame squarely at his old adversary’s feet: “Levesque wasn’t trying to improve the constitution; he was a separatist. The other premiers finally realized what I had known all along, that it was a matter of two totally conflicting visions of Canada and Quebec fighting it out.”

Now, I’m not going to lie to you and tell you that I didn’t – or don’t – admire Trudeau for his dogged determination to bring the Constitution home, and particularly for the transformation of Canada’s legal system and its culture in general through the Charter of Rights and Freedoms. During my final year at St. Peter’s District High School, I excitedly wrote a term paper about it for my Canadian History class; my teacher, Hillary Campbell, an unabashed Liberal supporter, gave me an A. But to this day, I still find it strange that a Canadian leader could count national unity among his “promises to keep, and miles to go before I sleep,” wage a bitter referendum battle over it, and then push forward with a new constitution that didn’t receive Quebec’s approval.

Even stranger: In the decade following his retirement from politics, Trudeau vigorously and harshly criticized the two follow-up attempts to secure Quebec’s signature on the constitution, the 1987 Meech Lake Accord and the 1992 Charlottetown Accord. (The Prime Minister during that period, Brian Mulroney, still hasn’t forgiven Trudeau for his anti-Meech campaign; when Trudeau came out against the Charlottetown deal, Mulroney sniffed, “I suppose if you’re Mr. Trudeau, it must be difficult to look at yourself in the mirror in the morning and realize you’ve seen perfection for the last time that day.”)

The icing on this constitutional cake is the fact that Mulroney was the last Prime Minister to re-open that national-unity hornet’s nest – a quarter-century (and five PMs) later, even with Trudeau’s son now at the helm of the nation, I remain unconvinced that I’ll see it happen in my lifetime.