Roch Carrier’s classic children’s story The Hockey Sweater paints a poignant picture of a group of young Quebecois boys skating on a backyard pond, all wearing Montreal Canadiens jerseys emblazoned with the Number 9 of Habs legend Maurice “The Rocket” Richard.

My closest parallel to a moment like that came in the winter of 1979, during my first-grade year at Ecole L’Ardoise. I was skating with a few of my cousins on a little makeshift outdoor rink located just down the hill from the school grounds, and with our beat-up hockey sticks and Bauer skates, we were determined to become pint-sized versions of the NHL’s greatest players.

Now, I was at a distinct disadvantage here because I wasn’t nearly as interested in hockey as my more athletic cousins. It certainly wasn’t for my parents’ lack of effort; they bought me all manner of Canadiens merchandise, from caps and scarves to PJs, as well as packs of O-Pee-Chee hockey cards. They even let me stay up late to watch my first-ever Hockey Night In Canada broadcast, but I seem to recall that I tuned out and went to bed after the second period, completely confused by what I was attempting to watch.

Still, I wanted to be a part of it all, somehow, some way. So when my cousin Chad announced, during that winter afternoon on the little rink in L’Ardoise, that he was going to be Guy Lafleur of the Montreal Canadiens, I flashed to the hockey logos on my NHL lunchbox, quickly chose a random team crest, and declared: “I’m going to be Dee Lafleur of the Vancouver Canucks!”

No, my cousins explained. It’s “Guy,” not “Dee.” And he plays for the Canadiens, not the Canucks. “So what?” I challenged. “I’m going to be Dee Lafleur of the Vancouver Canucks!” And in our own odd little L’Ardoise version of The Hockey Sweater, instead of a pond full of Rocket Richards, we had multiple Guy Lafleurs. Or “Dee” Lafleurs, as it were.

My six-year-old self had no idea that this Lafleur fellow was one of the NHL’s biggest superstars, or that he was only a few months away from scoring a playoff goal that we would all remember so vividly nearly 40 years later – a goal that played a big part in launching the broadcasting career of one Donald S. Cherry.

I wouldn’t learn this until years later, but Cherry, who had become the Bruins’ head coach in 1974, already had plenty of reasons to hate Lafleur by the time the 1978-79 Stanley Cup playoffs began. The Habs’ Number 10 was a ’70s scoring sensation and a major reason that the Canadiens had won the previous three Cups, with two of these championships coming as a result of Montreal’s defeats of Boston in the playoff finals. (By the time I started watching NHL games on a regular basis, over a decade later, the Bruins and Habs were in the same division. I can’t even imagine what it would be like to have these storied rivals as the last two teams standing in the race for Lord Stanley’s mug.)

To hear Cherry tell it years later, whoever won the 1979 Stanley Cup semi-final series between Montreal and Boston would easily take the Cup, because their eventual opponent, the New York Rangers, was (in Grapes’ words) “a piece of cake.” So it’s no surprise that the best-of-seven series was a hard-fought affair, with the Canadiens winning all three of their home games at the Montreal Forum and the Bruins taking their own three games at Boston Garden. With the supposedly-pushover Rangers ripe for the picking, the seventh and deciding game at the Forum was definitely a winner-take-all affair. 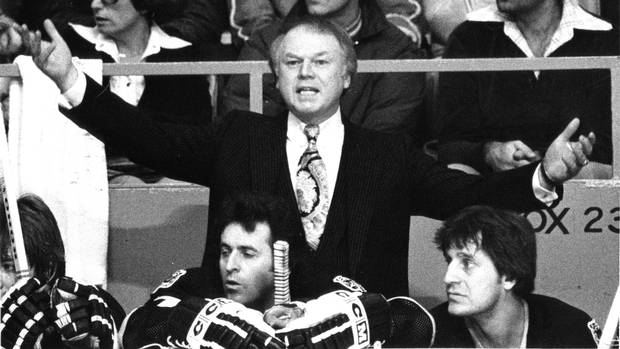 In his wonderful book The Boys of Saturday Night: Inside Hockey Night In Canada, Scott Young points out that Cherry had already made his mark on the series and even set the wheels in motion for his lengthy career as a CBC colour commentator. The flagship Canadian hockey broadcast wasn’t in the habit of keeping its cameras on NHL fights at that point in its history, so Cherry – reviewing a tape of a game with his team – was ticked that a brouhaha between the Bruins’ Stan Jonathon and the Canadiens’ Pierre Bouchard wasn’t included in the broadcast. Later in the series, according to long-time HNIC producer Ralph Mellanby, Cherry stormed off the Bruins’ bench and into the broadcast booth immediately after a fight in which a Montreal player was deemed to have emerged victorious. The Bruins’ coach apparently screamed at Mellanby: “I betcha you’re going to replay that one, because my guy got beat!” Mellanby calmed the Boston bench boss down, assured him that this fight wouldn’t be broadcast (which it wasn’t), and had this revelation shortly after the action resumed on the ice: “From that moment on I sensed that here was a guy who wanted to be involved in television, knew the impact television had, what it could do.”

(I should point out that part of the reason I remember this story so well is because I wound up reenacting it, live on the air, in the run-up to one of my earliest sportscasts for my first media job, at Port Hawkesbury’s CIGO AM Radio. Afternoon DJ Carlton Munroe liked my Grapes impersonation so much that he got me to tell the story again. Strangely, it wasn’t the last time I did a Don Cherry impersonation for CIGO, but that’s another tale for another day.) 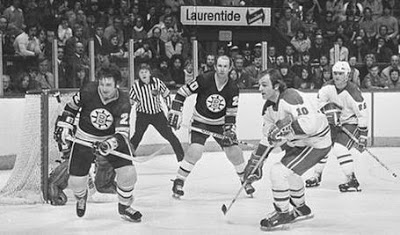 Back to Game 7 at the Forum, May 10, 1979. The Bruins seemed completely in control as they entered the third period up 3-1, but Mark Napier and Jacques Lemaire potted two quick goals to tie things up. However, with four minutes left in regulation time, Rick Middleton scored his second goal of the game to put the Bruins up 4-3.

And then, with time ticking down in the third period, Cherry made the mistake that still gives him nightmares nearly four decades later.

In late 1990, for the second edition of Cherry’s long-running Rock ‘Em Sock ‘Em Hockey videos, the coach-turned-commentator revisited that fateful night. With just over two minutes remaining in the third period, Lafleur was on the ice, with Bruins defensive forward Don Marcotte shadowing Number 10, as he had done throughout the night. According to Cherry, Montreal coach Scotty Bowman responded to this tactic by keeping Lafleur out for three straight shifts, exhausting Marcotte and perhaps befuddling Cherry, who recalled it this way: “The lines were getting confused and maybe I was getting a little confused. And when Guy and Donnie came off, two of our guys jumped on.”

For the uninitiated, the NHL insists that a team can’t have more than six players active in a game at any one time, even for a few seconds. Cherry’s goof meant the Bruins had six skaters on the Forum ice along with Boston goalie Gilles Gilbert. And with 2:34 left on the clock, the Bruins received a two-minute minor penalty, and as you can see in this YouTube clip, “Dee Lafleur” made them pay. 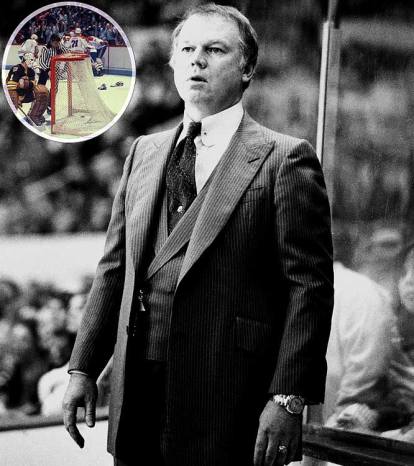 (Note: Obviously I can’t take credit for any of the photos in this blog post, and I feel the need to point out that the mash-up of Cherry and the on-ice action is courtesy of Sports Illustrated. They also put together a wonderful mini-documentary about that fateful Game 7, which you can see here.)

It goes without saying that the Canadiens, buoyed by Lafleur’s tying goal in the dying minutes of regulation, finished the job and won the game and the series, with unsung hero Yvon Lambert carving his name in the NHL history books at the halfway point of the first overtime period (below left). The Habs did indeed go on to defeat the Rangers in five games to claim their fourth straight Stanley Cup (below right). Only one NHL team, the New York Islanders, has won four consecutive Cups since that time, and given the parity in the league today, we’re not likely to see the feat repeated anytime soon. 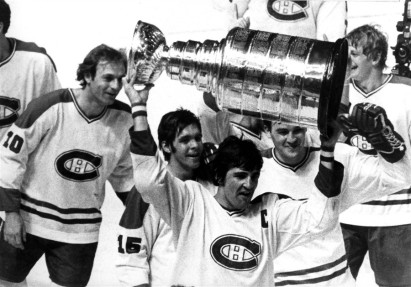 What’s striking for me about all of this – apart from the fact that I wasn’t even paying attention to hockey when it actually happened – is the genuine sympathy it inspires for Cherry and his Bruins. Watching the footage on Rock ‘Em Sock ‘Em Hockey II after I had a few years’ worth of seeing Boston embarrass Montreal in the playoffs, of course I was excited to see the Habs win such a hard-fought series in dramatic fashion. But the normally-bombastic Cherry’s narration in that particular presentation of his career nadir caught me off guard with its wistfulness: “I felt like someone had just driven a stake through my heart. I love these guys, and I just cost them the Stanley Cup.”

Even though the 1979 playoff loss cost Cherry his coaching job in Boston (he would guide the hapless Colorado Rockies through three non-playoff seasons before he moved into hockey commentary and the Rockies moved to New Jersey), Grapes has made peace with his historic mishap at the Montreal Forum. When CBC broadcast several classic games in its Saturday night hockey timeslot prior to the resolution of a labour dispute that shortened the 1994-95 NHL season, Cherry gamely participated in a rebroadcast of the entire 1979 Game 7, which opened with the words “TOO MANY MEN ON THE ICE” filling the screen in rapid succession to begin the broadcast. (The game, by the way, is available in its entirety here.) Interviewed for the 2014 Sports Illustrated mini-documentary cited earlier in this blog post, Cherry seems at peace with his fate: “When I die, my epitaph will be, ‘He was the coach that had too many men on the ice in Montreal.'”

(The men and their merchandise: The first ten editions of Don Cherry’s Rock ‘Em Sock ‘Em Hockey videos – I have nine, along with every subsequent chapter – and Guy Lafleur’s early-’90s “Flower Power” beverage line.)

Cherry, however, wasn’t the only person with an unusual aftermath from the strange events of May 10, 1979 in Montreal. While Grapes was beginning his life away from the bench and evolving into the Coach’s Corner host we all love, or hate, or love to hate, Lafleur was also adjusting to a new reality. He would never again sip champagne from the Stanley Cup, as both Number 10 and the Canadiens themselves experienced some lean years before Lafleur left the NHL in late 1984. (He would resurface for a brief but memorable comeback four years later, playing one season with the New York Rangers and two with the Quebec Nordiques before finally retiring in 1991; I caught the TV broadcast of his last game at the Forum, in which he scored his final NHL goal and was named the third star of the night in a 4-3 Montreal victory.)

After his official retirement, Lafleur rejoined the Canadiens organization and has served as one of their ambassadors for several years, even playing in Habs alumni games across the country. One of those games recently took place in my hometown of Port Hawkesbury; Lafleur wasn’t there, but 1979 overtime hero Yvon Lambert coached the Canadiens alumni to a 15-7 victory over a group of former Junior B Strait Pirates. (Chris “Knuckles” Nilan scored four goals, while Stephane Richer potted two – the same as former Nova Scotia Premier Rodney MacDonald, in uniform for the Pirates alumni.)

That might be as close as I ever get to “Dee Lafleur.” Hey, I’ll take it. At least this time I know he isn’t playing for the Vancouver Canucks. 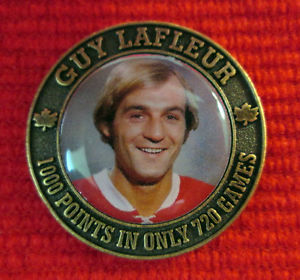