I’m sure Anne Murray has probably lost track of how many times she’s sung “You Needed Me” since it topped the Canadian and American singles charts in the fall of 1978, shortly after my sixth birthday.

After all, it’s arguable that “You Needed Me,” created by veteran Nashville songwriter Randy Goodrum, is Anne’s signature song. Some people might point to her late-’60s breakout hit, “Snowbird,” for that designation, but for my money “You Needed Me” is the ultimate showcase of Anne’s vocal range, the multiple layers and dimensions of her voice, and her unique ability to inhabit whatever character or setting any of her songs happens to hand her.

And I ought to point out that, when my parents and I visited the Anne Murray Centre in Springhill shortly after it opened in 1989, an entire room was dedicated to “You Needed Me” and played the song on a continuous loop throughout the museum’s hours of operation. I’m not sure if this is still the case (or if anybody working at, or visiting, the Anne Murray Centre ever griped about it), but it speaks volumes about the Grammy-and-Juno-winning ballad that it earned such a prominent place in that celebration of all things Anne. 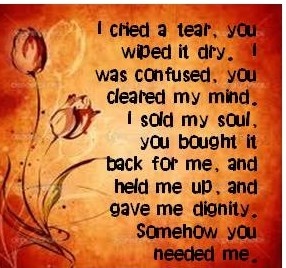 Now, I understand that “You Needed Me” is not for everybody. From the opening lyric – “I cried a tear, you wiped it dry” – it’s clear that a certain amount of vulnerability is required on the listener’s part to fully appreciate the song. But I happen to like the raw emotion in Goodrum’s lyrics, along with the fact that the relationship described in the song is clearly a two-way street. Anne spends roughly 90 per cent of the time finding creative ways to thank the song’s recipient for lifting her “so high that I could almost see eternity,” but the other 10 per cent is her repetition of the line “You needed me.” That declaration, coupled with the post-bridge reflection that “you even called me ‘friend,'” prevents “You Needed Me” from being a one-sided ode to an unseen friend, lover or inspiration; it’s a recap of the very best of relationships, a steadfast communal bond. (Goodrum himself has described “You Needed Me” as being about “unconditional undeserved love.”)

So, contrary to the opening statement in my previous paragraph, “You Needed Me” might actually be for everybody, or for every kind of committed relationship. It’s a happy marriage, young love, a kindred-spirits friendship, a student-teacher pairing, a cherished family connection, or even the relationship someone might have with God. It’s not specifically a Christian song, but its themes of kindness, support and empathy definitely have Christian overtones; lately, I’ve even found parallels between “You Needed Me” and Jesus’ declaration to the disciples that “I no longer call you servants…instead, I have called you friends” (John 14:15), or the heartfelt loyalty depicted in the Old Testament’s Book of Ruth. (Which is at least a step forward from my childhood mis-hearing of the line “You gave me hope when I was at the end” as “You gave me hope when I was at the inn,” leading me to imagine Anne Murray as the Virgin Mary, singing the song to Joseph.)

So, because “You Needed Me” is so flexible in its intent, it shouldn’t surprise you that it’s wound up just about everywhere. During that aforementioned trip to the Anne Murray Centre, I saw a framed caricature of Pierre Trudeau by veteran Toronto Sun cartoonist Andy Donato, gaily reworking “You Needed Me” after his 1980 federal election victory. (“You put me high upon a pedestal…So high that I could almost see to Calgary…”) More recently, and astoundingly, Anne played herself in a 2013 episode of the FOX animated series Family Guy which also had series creator Seth MacFarlane, in character as normally-psychopathic baby Stewie Griffin, belting out “You Needed Me” en route to visiting Anne at her log cabin somewhere in the wilds of Canada. (Since I no longer watch Family Guy as I find it too graphic and insensitive for my tastes, I can basically tell you that Anne name-checks “Snowbird” writer Gene MacLellan and a moose eventually shows up. That’s pretty much all you need to know.)

As for me, the first time I heard “You Needed Me” was at the age of eight (two years after its release on the album Let’s Keep It That Way), on our dining-room stereo, courtesy of one of the three Anne Murray eight-track tapes my folks owned. I knew that Dad was a fan of Anne’s classic hits; I didn’t know that “You Needed Me” would help me relate to him in ways that my own mind and heart couldn’t figure out through much of my life.

Like most men of his generation, Dad wasn’t prone to showing emotion or letting his guard down. But deep down I always knew he cared for our family and tried to make things the best he could for us. I also knew that he was genuinely upset when, in late 1992 and early 1993, I required back-to-back emergency surgeries in Halifax to save my vision when my retina began detaching from my right eye. (My left eye hadn’t worked through much of the rest of my first 20 years and is not likely to ever have vision again.)

In the weeks that followed this surgery, I had at least six false alarms – bright lights or floaters that randomly showed up within my field of vision – that would, without warning, force my parents to pile me into the car and rush me to Halifax to get tested again, only to determine that everything was fine and that these symptoms were just part of the recovery process. Dad willingly did all the driving for these trips but I could tell that it was taking a toll on him. (We were relieved to later discover that these false alarm situations could also be serviced by a doctor in Antigonish, but in many ways it was no less nerve-wracking.)

This recovery period kept me in Cape Breton and forced me to miss the second half of my third year at the University of King’s College School of Journalism, but it also gave me my first big break when I learned that a newsroom spot had opened up at Port Hawkesbury’s CIGO-AM Radio in the spring. I remained there through the summer and was re-hired to fill in during the same time period when I finally finished up my third year at King’s in 1994.

I wasn’t driving at that point, partly because of my vision issues and partly because Dad had tried to teach me to drive when I was 15-going-on-16 and it just didn’t take. I got lifts from friends and relatives in L’Ardoise for those first two springs/summers at CIGO, but one morning I had to do the early shift and Dad was the only person that could drive me up, which he did, in the pouring rain.

We had about 10 minutes of driving to go when our vehicle abruptly skidded to a halt. Dad got out and surveyed the situation; yes, we had a flat tire, and yes, he was going to be the one to get soaked and fix it. I felt awful. I knew there was nothing I could do to make things better.

When I got to the radio station, just in time to do my first newscast of the day at 6:30 a.m., I knew Dad would probably be listening to CIGO on the way home. I asked our program director, Paul Knott, who was filling in for the morning DJ that day, if we could break with the pre-programmed adult contemporary playlist and put on a song for Dad. Without mentioning my father’s name, Paul very kindly announced that this request was going out to “a father who fixed a flat tire in the rain so he could drive his son to work,” and launched the first familiar strains of “You Needed Me.”

I have no idea if Dad actually heard it, and I would be lying to you if I told you that my father and I have always had a perfect relationship before or after that rainy morning in the spring of 1994. Of course we haven’t; no father and son ever do. But I would get many reminders over the following 23 years, including some of the lowest points of my entire life, that the lyrics of that song are all true when it comes to how he has treated me, how he has loved me, and yes, on occasion, how he has needed me.

Above: I never thought I’d ever find a way to get Anne Murray to wish Dad a happy birthday. Twitter is a marvelous invention.)

Footnote: A year before Anne Murray released Let’s Keep It That Way and “You Needed Me,” she delivered the children’s album There’s A Hippo In My Tub, which features a sentimental favourite of mine, “Stars Are The Windows Of Heaven.” It’s not on the all-encompassing level of “You Needed Me” – few things are – but it’s a lovely little tune, and you can listen to it here.